With this second release of BICS there are actually a number of ways to get on-premise data up into BICS’s accompanying database service:

In our case the situation is a bit more complicated in that our data sits in a Hadoop cluster, as Hive tables that we’re accessing through the Cloudera Impala MPP engine. OBIEE 11.1.1.9 can actually connect directly to Impala and if we were just using Answers and Dashboards we wouldn’t have any more work to do, but as we’re using VA through BICS and BICS can’t access on-premise data sources, we need some way of copying the data up into BICS so VA can access it. Again, there’s many ways you can get data out of Hive on Hadoop and into databases and files, but the approach I took is this:

Again, there are also other ways to do this - another option is to just lift-and-shift the current 11.1.1.9 RPD up into BICS, and replicate the Hive/CSV data into Oracle Database-as-a-Service and then repoint the uploaded RPD to this service, but I haven’t got a DBaaS instance to-hand and I think it’d be more useful to replicate using BICS and recreate the RPD manually - as that’s what most customers using BICS will end-up doing. So the first step then is to export the Hive data out into CSV files using Hue, by first running a SELECT * FROM … for each table, then using the menu option to export the query results to a CSV file on my workstation.

Then it’s a case of setting up BICS Data Sync to first connect to my BICS cloud instance, and then selecting one-by-one the CSV files that I’ll be uploading into BICS via this tool. 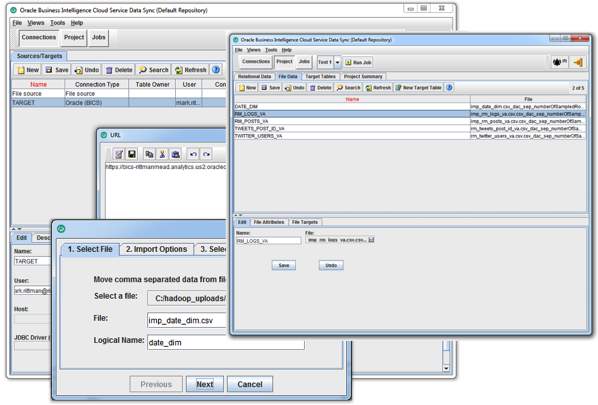 Of course anyone who’s been around Oracle BI for a while will recognise Data Sync as being built on the DAC, the ETL orchestration tool that came with the 7.9.x releases of BI Apps and worked in-conjunction with Informatica PowerCenter to load data into the BI Apps data warehouse. The DAC is actually a pretty flexible tool (disclaimer - I know the development PMs at Redwood Shores and think they’re a pretty cool bunch of people) and more recently it gained the ability to replicate BI Apps DW data into TimesTen for use with Exalytics, so it’s pluggable architecture and active development team meant it provided a useful platform to deliver something in-between BICS’s ApEX data uploader and fully-fledged ODI loading into Oracle DBaaS. The downside of using something built on the DAC is that the DAC had some UI “quirks”, but equally the upside is that if you know the DAC, you can pretty much pick up Data Sync and guess how it works.

As part of uploading each CSV file, I also get to sample the file contents and confirm the datatype choices that Data Sync has suggested; these can of course be amended, and if I’m bringing in data from Oracle, for example, I wouldn’t need to go through such an involved process.

Then it’s a case of uploading the data. In my case one of the tables uploaded OK first time, but an issue I hit was where Hive tables had numeric columns containing NULLs that got exported as the text “NULL” and then caused the load to fail when trying to insert them into numeric columns. Again, a bit of knowledge of how the DAC worked came in useful as I went through the log files and then restarted parts of the load - in the end I replaced the word NULL with an empty string and the loads then succeeded. 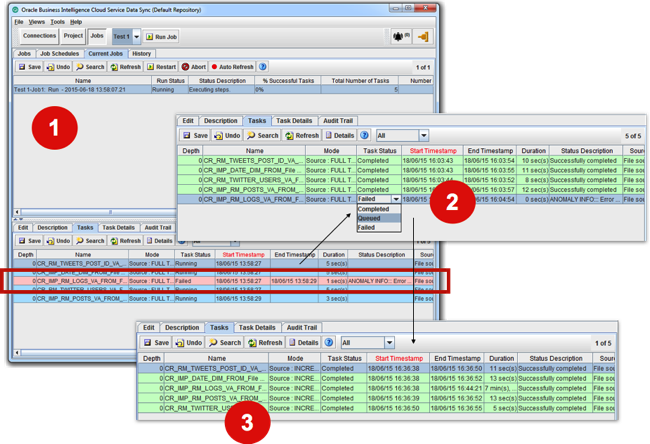 Now the data should be uploaded to BICS, you can check out the new tables and their contents either from within BICSs Data Modeller function, or from within the ApEx console that comes with BICS’s database part. 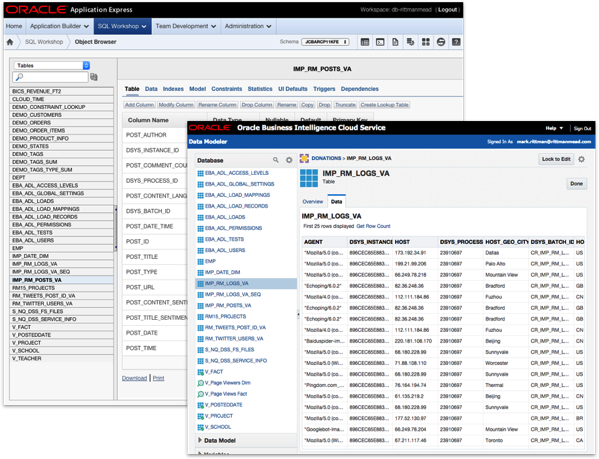 One thing I did know I’d have to give some thought to was how to do the types of RPD modelling I’d done in the on-premise RPD, within the more constrained environment of the BICS data modeller. Looking back at the on-premise RPD I’ve made a lot of use of aliases to create fact and dimension versions of key log tables (posts, tweets) and multiple versions of the date dimensions, whereas in BICS you don’t get aliases but you can create database views. What was more worrying was that I’d used columns from the main webserver log table to populate both the main logical fact table and another dimension whilst still keeping a single source table as their physical source, but in BICS I’d have to create these two sources as views and then join them on a common key, which would be tricky as the log table in Hive didn’t have an obvious primary key. In the end I “cheated” a bit and created a derived copy of the incoming log file table with a sequence number added to it, so that I could then join both the derived fact table and dimension table on this synthetic unique key column. 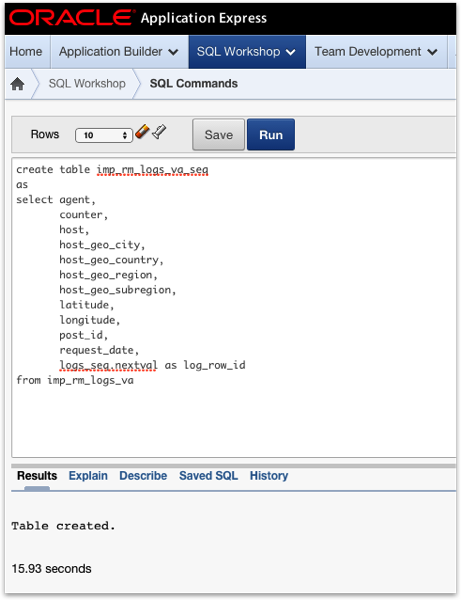 Now it’s a case of modelling out the various incoming tables uploaded via Data Sync into the facts and dimensions that the BICS data model will use; again something to be aware of is that each of these tables will need to join to its relevant dimensions or facts, so you need to leave the joining keys in the fact table rather than remove them as you’d do when creating logical fact tables in on-premise OBIEE. 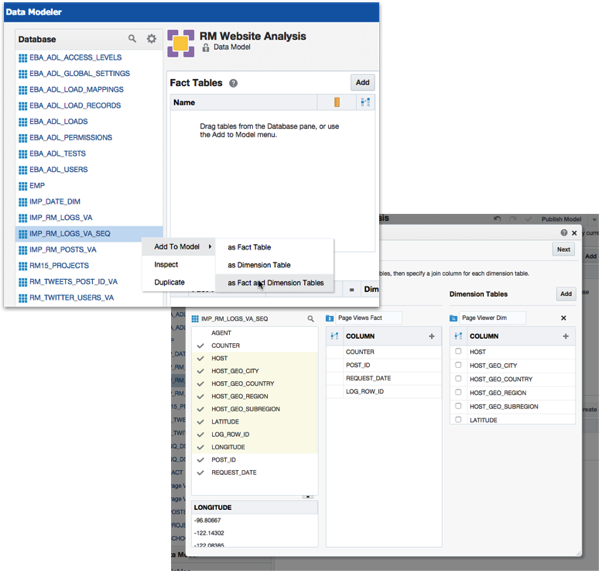 Tables that only perform one role, for example the IMP_RM_POSTS_VA table that contains details of all blog posts and web pages on our site, can be brought into the model as they are without creating views. For the second time when I add in the time dimension table, this time to create a time dimension role table for the Tweets fact table, I have to create a view over the table that performs a similar role to alias tables in on-premise OBIEE, and I’m then directed to create a fact or dimension object in the model from that view. 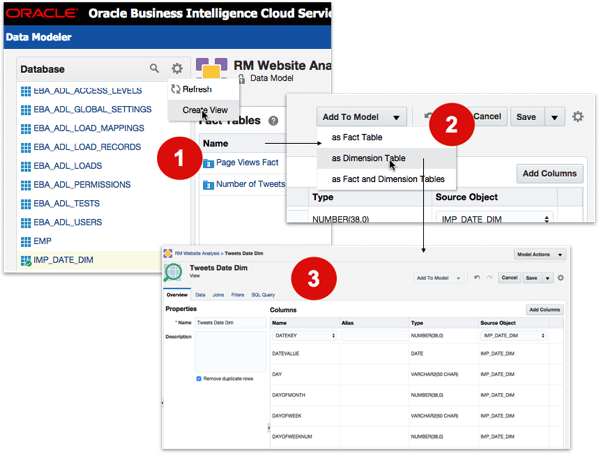 Once this is all done, I end up with a basic BICS data model that’s starting to look like the one I had with the on-premise OBIEE install. 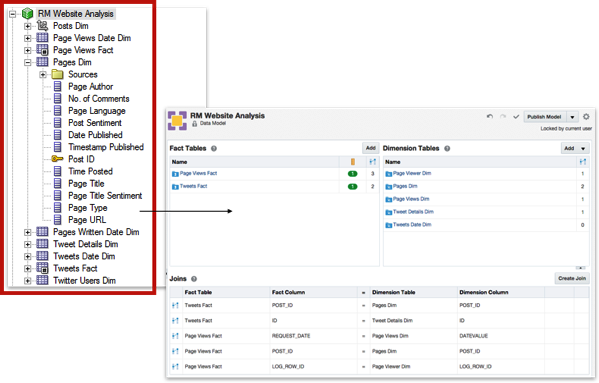 Then finally, once I’d amended all the column names, brought in all of the additional columns and lookup tables to provide for example lists of Twitter user handles, I could then view the model in BICS’s Visual Analyzer and start produce data visualisation projects off of it. 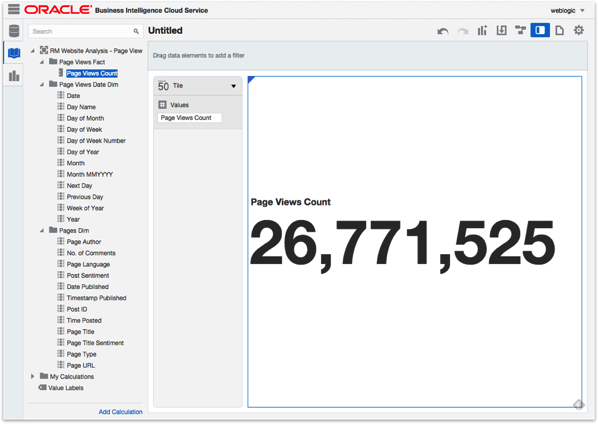 So - it’s admittedly a bit convoluted in the first iteration but once you’ve set up the BICS data model and the Data Sync upload process, you can use DataSync to refresh the replicated Hive table data in the BICS database instance and keep the two systems in-sync. As I said, OBIEE12c will come with Visual Analyzer as part of the on-premise install, but until then this is the way we link VA to Big Data Discovery on Hadoop to enable Visual Analyzer access to BDD’s enriched datasets.