The OBIEE BI Server cache can be one of the most effective ways of improving response times of OBIEE dashboards. By using data already in the cache it reduces load on the database, the network, and the BI Server.

Should you be using it? I always describe it as the “icing on the cake” – it’s not a fix for a badly-designed OBIEE system, but it does make a lot of sense to use once you’re happy that the foundations for the system are in place. If the foundations are not not in place? Then you’re just papering over the cracks and at some point it’s probably going to come back to bite you. As Mark Rittman put it nearly seven years ago, it’s “[…]usually the last desperate throw of the dice”. The phrase “technical debt”? Yeh, that. But, BI Server caching used after performance review and optimisation rather than instead of - then it’s a Good Thing.

So you’ve decided to use the BI Server cache, and merrily trotted over to Enterprise Manager to enable it, restarted the BI Server, and now your work is done, right? Not quite. Because the BI Server cache will start to store data from all the queries that you run, and use it to satisfy subsequent queries. Not only will it match on a direct hit for the same query, it will use a subset of an existing cache entry where appropriate, and can even aggregate up from what’s in the cache to satisfy a query at a higher level. Clever stuff. But, what happens when you load new data into your data warehouse? Well, the BI Server continues to serve requests out of the cache, because why shouldn’t it? And herein lies the problem with “just turn caching on”. You have to have a cache management strategy.

A cache management strategy sounds grand doesn’t it? But it boils down to two things:

Every query that is run through the BI Server, whether from a Dashboard, Answers, or more funky routes such as custom ODBC clients or JDBC, will end up in cache. It’s possible to “seed” (“prime”/“warmup”) the cache explicitly, and this is discussed later. The only time you won’t see data in the cache is if (a) you have BI Server caching disabled, or (b) you’ve disabled the Cacheable option for a physical table that is involved in providing the data for the query being run. 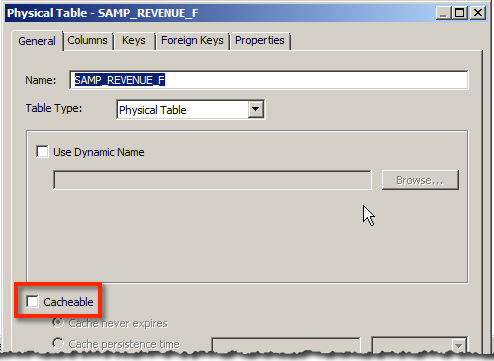 You can see metadata for the current contents of the cache in the Administration Tool when connected online to the BI Server, through the Manage -> Cache menu option. This gives you lots of useful information (particularly when you come to optimising cache usage) including the size of each entry, when it was created, when it was last used, and so on.

So we’ve a spread of queries run that hit various dimension and fact tables and created lots of cache entries. Now we’ve loaded data into our underlying database, so we need to make sure that the next time a user runs an OBIEE query that uses the new data they can see it. Otherwise we commit the cardinal sin of any analytical system and show the user incorrect data which is a Bad Thing. It may be fast, but it’s WRONG….

We can purge the whole cache, but that’s a pretty brutal approach. The cache is persisted to disk and can hold lots of data stretching back months - to blitz all of that just because one table has some new data is overkill. A more targeted approach is to purge by physical database, physical table, or even logical query. When would you use these?

Which one is correct depends on

If you are heavily dependant on the cache and have large amounts of data in it, you are probably going to need to invest time in a precise and potentially complex cache purge strategy. Conversely if you use caching as the ‘icing on the cake’ and/or it’s quick to seed new content then the simplest option is to purge the entire cache. Simple is good; OBIEE has enough moving parts without adding to its complexity unnecessarily.

Note that OBIEE itself will perform cache purges in some situations including if a dynamic repository variable used by a Business Model (e.g. in a Logical Column) gets a new value through a scheduled initialisation block.

There are several ways in which we can purge the cache. First I’ll discuss the ones that I would not recommend except for manual testing:

So the two viable options for cache purging are:

These are often called “ODBC” Procedures but technically ODBC is just one - of several - ways that the commands can be sent to the BI Server to invoke.

As well as supporting queries for data from clients (such as Presentation Services) sent as Logical SQL, the BI Server also has its own set of procedures. Many of these are internal and mostly undocumented (Christian Berg does a great job of explaining them here, and they do creep into the documentation here and here), but there are some cache management ones that are fully supported and documented. They are:

The names of these match up to the purge processes that I describe above. The syntax is in the documentation, but what I am interested in here is how you can invoke them. They are my preferred method for managing the BI Server cache because they enable you to tightly couple your data load (ETL) to your cache purge. Setting the cache to purge based on a drop-dead timer (whether crontab, tivoli, Agent/iBot, whatever) gives you a huge margin of error if your ETL runtime does not remain consistent. Whether it organically increases in runtime as data volumes increase, or it fails and has to be fixed and restarted, ETL does not always finish bang-on when it is ‘supposed’ to.

You can call these procedures in the several ways, including:

My preference is for JDBC or Web Service, because they can be called from anywhere. In larger organisations the team building the ETL may have very little to do with OBIEE, and so asking them to install OBIEE components on their server in order to trigger cache purging can be quite an ask. Using JDBC only a single .jar needs copying onto the server, and using the web service not even that:

For details of configuring ODI to use the BI Server JDBC driver in order to tightly couple the cache management into an existing ODI load job, stay tuned for a future blog! 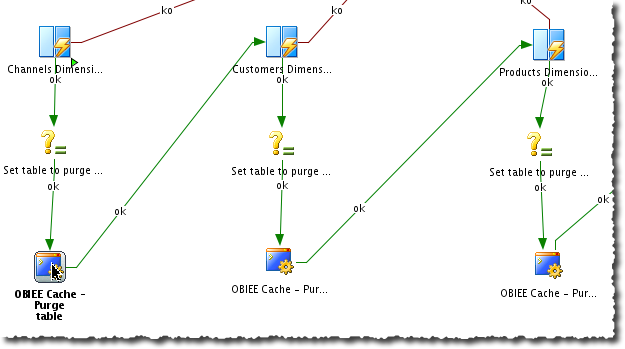 The second viable approach to automated cache purging is EPT, which is a decoupled approach to managing the cache purge, with two components:

So EPT is in a sense the equivalent of using SAPurgeCacheByTable, but in a manner that is not tightly coupled. It relies on configuring the BI Server for EPT, and there is no easy way to know from your ETL if the cache purge has actually happened. It also means that the cache remains stale potentially as long as the polling interval that you’ve configured. Depending on when you’re running your ETL and the usage patterns of your users this may not be an issue, but if you are running ETL whilst users are on the system (for example intra-day micro ETL batches) you could end up with users seeing stale data. Oracle themselves recommend not setting the polling interval any lower than 10 minutes.
EPT has the benefit of being very easy to implement on the ETL side, because it is simply a database table into which the ETL developers need to insert a row for each table that they update during the ETL.

Bob runs an OBIEE dashboard, and the results are added to the cache so that when Bill runs the same dashboard Bill gets a great response rate because his dashboard runs straight from cache. Kinda sucks for Bob though, because his query ran slow as it wasn’t in the cache yet. What’d be nice would be that for the first user on a dashboard the results were already in cache. This is known as seeding the cache, or ‘priming’ it. Because the BI Server cache is not dumb and will hit the cache for queries that aren’t necessarily direct replicas of what previously ran working out the optimal way to seed the cache can take some careful research. The documentation does a good job of explaining what will and won’t qualify for a cache hit, and it’s worth reading this first.

There are several options for seeding the cache. These all assume you’ve figured out the queries that you want to run in order to load the results into cache. 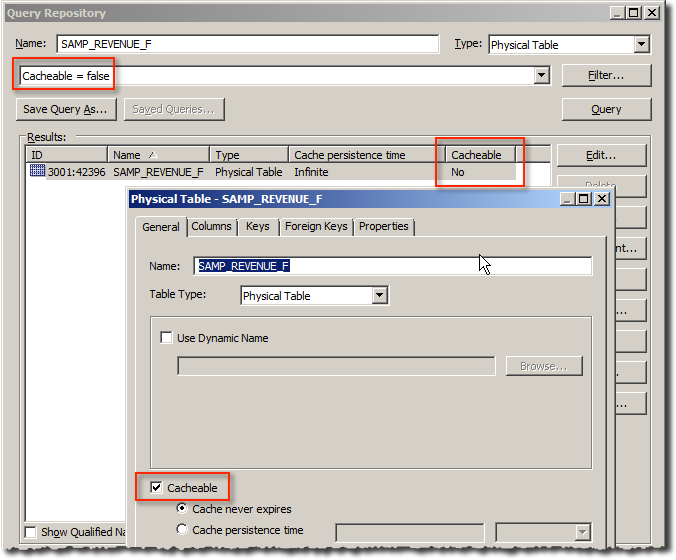 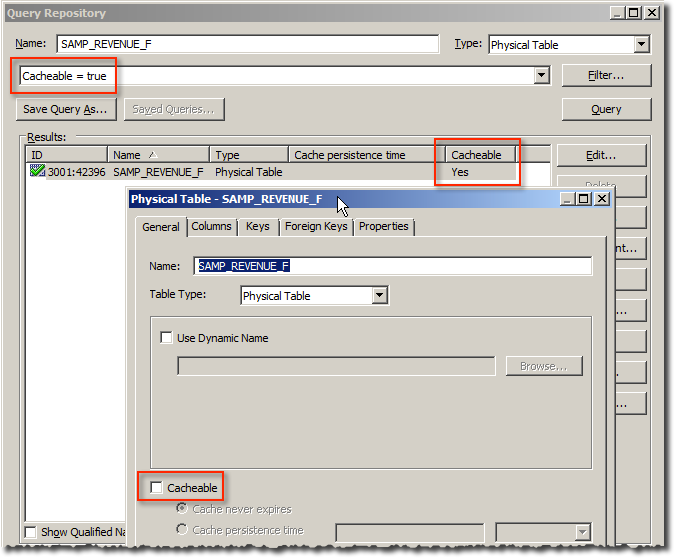 Day in the Life of an OBIEE Cache Entry (Who Said BI Was Boring?)

In this example here I’m running a very simple report from SampleApp v406: 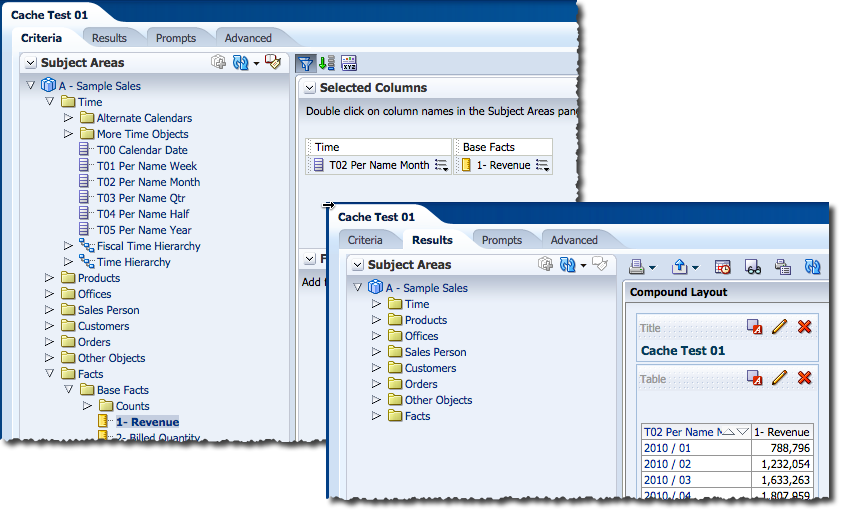 The Logical SQL for this is:

Why’s that useful to know? Because when working with the cache resubmitting queries is needed frequently and doing so directly from an interface like nqcmd is much faster (for me) than a web GUI. Horses for courses…

So I’ve run the query and now we have a cache entry for it. How do we know? Because we see it in the nqquery.log (and if you don’t have it enabled, go and enable it now):

Query Result Cache: [59124] The query for user 'weblogic' was inserted into
the query result cache.
The filename is '/app/oracle/biee/instances/instance1/bifoundation/OracleBIServerComponent/coreapplication_obis1/cache/NQS__735866_57498_0.TBL'.

We see it in Usage Tracking (again, if you don’t have this enabled, go and enable it now):

We can also see it in the Administration Tool (when connected online to the BI Server):

We can even see it and touch it (figuratively) on disk:

So we have the data in the cache. The same query run again will now use the cache entry, as seen in nqquery.log:

and in Usage Tracking:

“Interestingly” Usage Tracking shows a count of 1 for number of DB queries run, which we would not expect for a cache hit. The nqquery.log shows the same, but no query logged as being sent to the database, so I’m minded to dismiss this as an instrumentation bug.

Now what about if we want to run a query but not use the BI Server Cache? This is an easy one, plenty blogged about it elsewhere - use the Request Variable DISABLE_CACHE_HIT=1. This overrides the built in system session variable of the same name. Here I’m running it directly against the BI Server, prefixed onto my Logical SQL - if you want to run it from within OBIEE you need the Advanced tab in the Answers editor.

Now we get a cache ‘miss’, because we’ve specifically told the BI Server to not use the cache. As you’d expect, Usage Tracking shows no cache hit, but it does show a cache insert - because why shouldn’t it?

If you want to run a query without seeding the cache either, you can use DISABLE_CACHE_SEED=1:

These request variables can be set per analysis, or per user by creating a session initialisation block to assign the required values to the respective variables.

The BI Server cache is held on disk, so it goes without saying that storing it on fast (eg SSD) disk is a Good Idea. There's no harm in giving it its own filesystem on *nix to isolate it from other work (in terms of filesystems filling up) and to make monitoring it super easy.

Use the DATA_STORAGE_PATHS configuration element in NQSConfig.ini to change the location of the BI Server cache.

I wrote recently about the OBIEE BI Server Cache and how useful it can be, but how important it…

At the beginning of the year, I wrote a couple of posts about Oracle Enterprise Metadata Management, one about…