I’m over in Redwood Shores, California this week for the BIWA Summit 2016 conference where I’ll be speaking about BI development on Oracle’s database and big data platforms. As it’s around three months since OBIEE12c came out and we were here for Openworld, I thought it’d be a good opportunity to reflect on how OBIEE12c has been received by ourselves, the partner community and of course by customers. Given OBIEE11g was with us for around five years it’s clearly still early days in the overall lifecycle of this release, but it’s also interesting to compare back to where we were around the same time with 11g and see if we can spot any similarities and differences to take-up then.

Starting with the positives; Visual Analyzer (note - not the Data Visualization option, I’ll get to that later) has gone down well with customers, at least over in the UK. The major attraction for customers seems to be “Tableau with a shared governed data model and integrated with the rest of our BI platform” (see Oracle’s slide from Oracle Openworld 2015 below), and seeing as the Data Visualization Option is around the same price as Tableau Server the synergies around not having to deploy and support a new platform seem to outweigh the best-of-breed query functionality of Tableau and Qlikview. 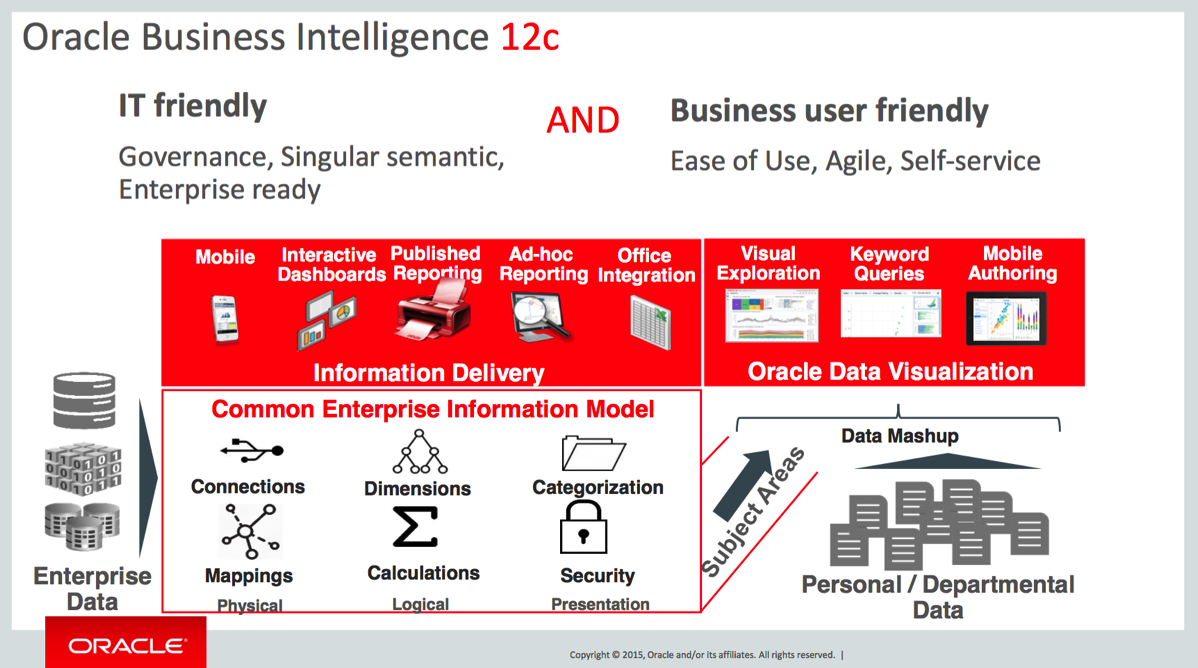 Given that VA is an extra-cost option what I’m seeing is customers planning to upgrade their base OBIEE platform from 11g to 12c as part of their regular platform refresh, and considering the VA part after the main upgrade as part of a separate cost/benefit exercise. VA however seems to be the trigger for customer interest in an upgrade, with the business typically now holding the budget for BI rather than IT and Visual Analyzer (like Mobile with 11g) being the new capability that unlocks the upgrade spend.

On the negative side, Oracle charging for VA hasn’t gone down well, either from the customer side who ask what it is they actually get for their 22% upgrade and maintenance fee if they they have to pay for anything new that comes with the upgrade; or from partners who now see little in the 12c release to incentivise customers to upgrade that’s not an additional cost option. My response is usually to point to previous releases - 11g with Scorecards and Mobile, the database with In-Memory, RAC and so on - and say that it’s always the case that anything net-new comes at extra cost, whereas the upgrade should be something you do anyway to keep the platform up-to-date and be prepared to uptake new features. My observation over the past month or so is that this objection seems to be going away as people get used to the fact that VA costs extra; the other push-back I get a lot is from IT who don’t want to introduce data mashups into their environment, partly I guess out of fear of the unknown but also partly because of concerns around governance, how well it’ll work in the real world, so on and so on. I’d say overall VA has gone down well at least once we got past the “shock” of it costing extra, I’d expect there’ll be some bundle along the lines of BI Foundation Suite (BI Foundation Suite Plus?) in the next year or so that’ll bundle BIF with the DV option, maybe include some upcoming features in 12c that aren’t exposed yet but might round out the release. We’ll see.

The other area where OBIEE12c has gone down well, surprisingly well, is with the IT department for the new back-end features. I’ve been telling people that whilst everyone thinks 12c is about the new front-end features (VA, new look-and-feel etc) it’s actually the back-end that has the most changes, and will lead to the most financial and cost-saving benefits to customers - again note the slide below from last year’s Openworld summarising these improvements. 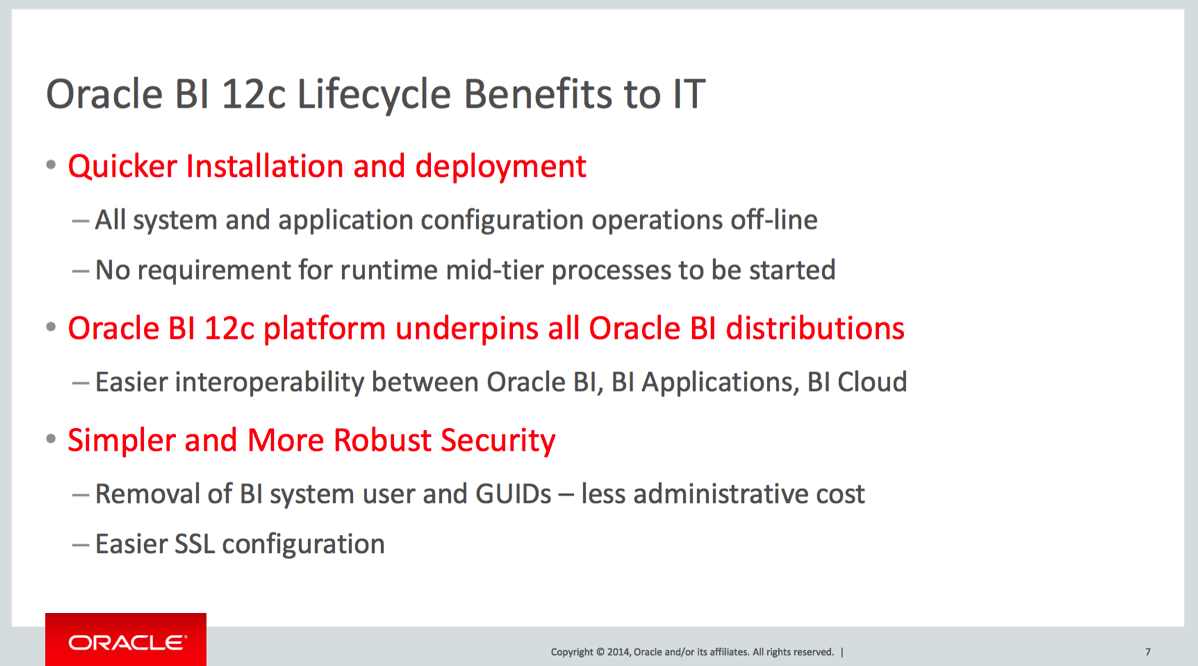 Simplifying install, cloning, dev-to-test and so on will make BI provisioning considerably faster and cheaper to do, whilst the introduction of new concepts such as BI Modules, Service Instances, layered RPD customizations and BAR files paves the way for private cloud-style hosting of multiple BI applications on a single OBIEE12c domain, hybrid cloud deployments and mass customisation of hosted BI environments similar to what we’ve seen with Oracle Database over the past few years.

What’s interesting with 12c at this point though is that these back-end features are only half-deployed within the platform; the lack of a proper RPD upload tool, BI Modules and Services Instances only being in the singular and so on point to a future release where all this functionality gets rounded-off and fully realised in the platform, so where we are now is that 12c seems oddly half-finished and over-complicated for what it is, but it’s what’s coming over the rest of the lifecycle that will make this part of the product most interesting - see the slide below from Openworld 2014 where this full vision was set-out, but in Openworld this year was presumably left-out of the launch slides as the initial release only included the foundation and not the full capability. 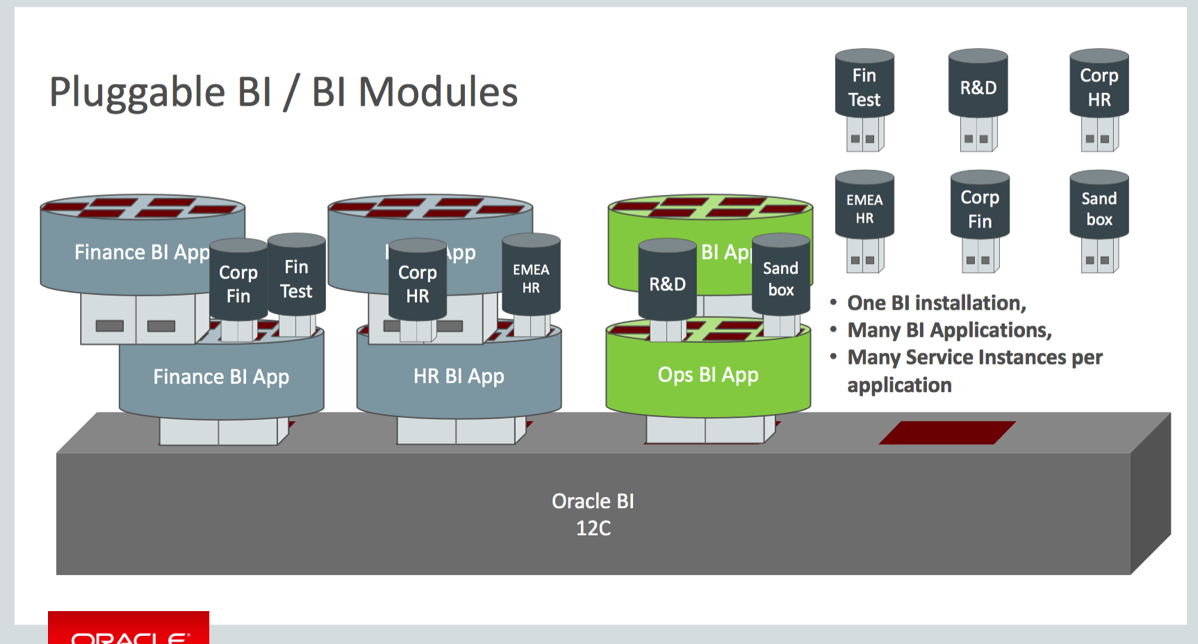 Compared back to where we were with OBIEE11g (11.1.1.3, at the start of the product cycle) which was largely feature-complete but had significant product quality issues, with 12c we’ve got less of the platform built-out but (with a couple of notable exceptions) generally good product quality, but this half-completed nature of the back-end must confuse some customers and partners who aren’t really aware of the full vision for the platform.

And finally, cloud; BICS had an update some while ago where it gained Visual Analyzer and data mashups earlier than the on-premise release, and as I covered in my recent UKOUG Tech’15 conference presentation it’s now possible to upload an on-premise RPD (but not the accompanying catalog, yet) and run it in BICS, giving you the benefit of immediate availability of VA and data mashups without having to do a full platform upgrade to 12c. 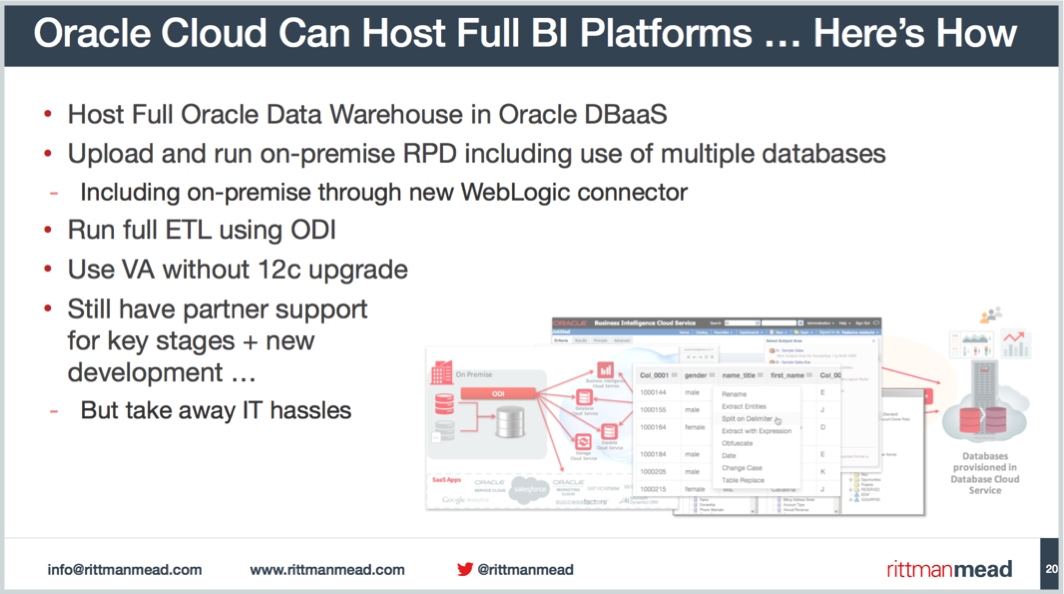 In-practice there are still some significant blockers for customers looking to move their BI platform wholesale into Oracle Cloud; there’s no ability yet to link your on-premise Active Directory or other security setup to BICS meaning that you need to recreate all your users as Oracle Cloud users, and there’s very limited support for multiple subject areas, access to on-premise data sources and other more “enterprise” characterises of an Oracle BI platform. And Data Visualisation Cloud Service (DVCS) has so far been a non-event; for partners the question is why would we get involved and sell this given the very low cost and the lack of any area we can really add value, while for customers it’s perceived as interesting but too limited to be of any real practical use. Of course, over the long term this is the future - I expect on-premise installs of OBIEE will be the exception rather than the rule in 5 or 10 years time - but for now Cloud is more “one to monitor for the future” rather than something to plan for now, as we’re doing with 12c upgrades and new implementations.

So in summary, I’d say with OBIEE12c we were pleased and surprised to see it out so early, and VA in-particular has driven a lot of interest and awareness from customers that has manifested itself in enquires around upgrades and new features presentations. The back-end for me is the most interesting new part of the release, promising significant time-saving and quality-improving benefits for the IT department, but at present these benefits are more theoretical than realisable until such time as the full BI Modules/multiple Services Instances feature is rolled-out later this year or next. Cloud is still “one for the future” but there’s significant interest from customers in moving either part or all of their BI platform to the cloud, but given the enterprise nature of OBIEE it’s likely BI will follow after a wider adoption of Oracle Cloud for the customer rather than being the trailblazer given the need to integrate with cloud security, data sources and the need to wait for some other product enhancements to match on-premise functionality.