Last week saw Oracle Openworld 2015 running in San Francisco, USA, with Rittman Mead delivering a number of sessions around BI, data integration, Big Data and cloud. Several of us took part in Partner Advisory Councils on the Friday before Openworld itself, and along with the ACE Director briefings earlier that week we went into Openworld with a pretty good idea already on what was being announced - but as ever there were a few surprises and some sessions hidden away that were actually very significant in terms of where Oracle might be going - so let’s go through what we thought were the key announcements first, then we’ll get onto the more interesting stuff at the end.

And of course the key announcement for us and our customers was the general availability of OBIEE12c 12.2.1, which we described in a blog post at the time as being focused primarily on business agility and self-service - the primary drivers of BI license spend today. OBIEE12c came out the Friday before Openworld with availability across all supported Unix platforms as well as Linux and Windows, with this initial release not seeming massively different to 11g for developers and end-users at least at first glance - RPD development through the BI Administration tool is largely the same as 11g, at least for now; Answers and Dashboards has had a face-lift and uses a new flatter UI style called “Oracle Alta” but otherwise is recognisably similar to 11g, and the installer lays down Essbase and BI Publisher alongside OBIEE. 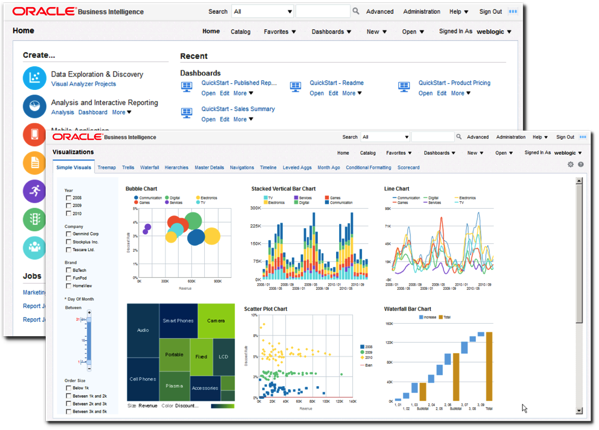 Under the covers though there are some key differences and improvements that will only become apparent after a while, or are really a foundation for much wider changes and improvements coming later in the 12c product timeline. The way you upload RPDs gives some hint of what’s to come - with 11g we used Enterprise Manager to upload new RPDs to the BI Server which then had to be restarted to pick-up the new repository, whereas 12c has a separate utility for uploading RPDs and they’re not stored in quite the same way as before (more on this to come…). In addition there’s no longer any need to restart the BI Server (or cluster of BI Servers) to use the new repository, and the back-end has been simplified in lots of different ways all designed to enable cloning, provisioning and portability between on-premise and cloud based around two new concepts of “service instances” and “BI Modules” - expect to hear more about these over the next few years, and with the diagram below outlining 12c’s product architecture at a high-level.

Of course there are two very obvious new front-end features in OBIEE12c, Visual Analyzer and data-mashups, but they require an extra net-new license on-top of BI Foundation Suite to use in production. Visual Analyzer is Oracle’s answer to Tableau and adds data analysis, managed data discovery and data visualisation to OBIEE’s existing capabilities, but crucially uses OBIEE’s RPD as the primary data source for users’ analysis - in other words providing Tableau-like functionality but  with a trusted, managed single source of data managed and curated centrally. Visual Analyzer is all about self-service and exploring datasets, and it’s here that the new data-mashup feature is really aimed at - users can upload spreadsheets of additional measures and attributes to the core dataset used in their Visual Analyzer project, and blend or “mash-up” their data to create their own unique visualizations, as shown in the screenshot below: 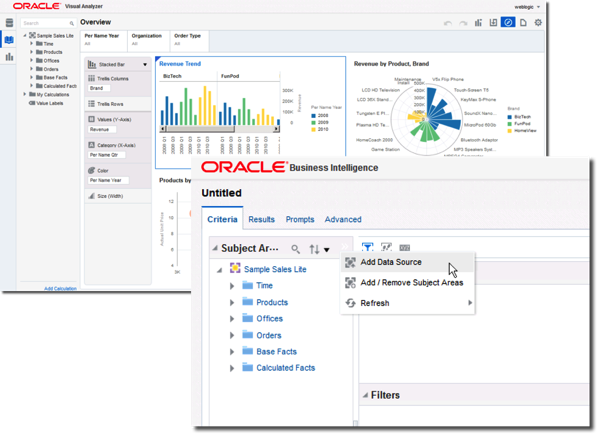 Data Mashups are also available for the core Answers product as well but they’re primarily aimed at VA, and for more casual users where data visualisation is all they want and cloud is their ideal delivery platform, Oracle also released Data Visualisation Cloud Service (DVCS)- aka Visual-Analyzer-in-the-cloud. 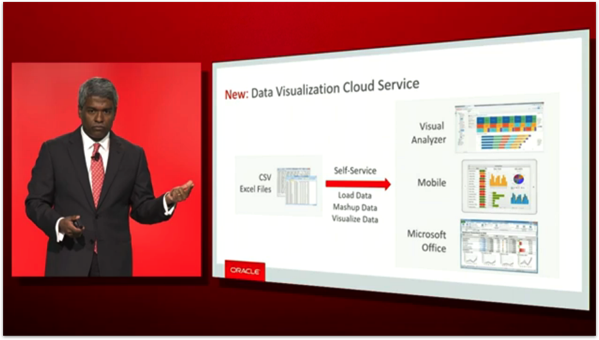 To see DVCS in action, the Youtube video below shows just the business analytics part of Thomas Kurian’s session where DVCS links to Oracle’s Social Network Cloud Service to provide instant data visualisation and mashup capabilities all from the browser - pretty compelling if you ignore the Oracle Social Network part (is that ever used outside of Oracle?)

Think of DVCS as BICS with Answers, Dashboards and the RPD Model Builder stripped-out, all data instead uploaded from spreadsheets, half the price of BICS and first-in-line for new VA features as they become available. This “cloud first” strategy goes across the board for Oracle now - partly incentive to move to the cloud, mostly a reflection of how much easier it is to ship new features out when Oracle controls the installation, DVCS and BICS will see updates on a more or less monthly cycle now (see this MOS document that details new features added to BICS since initial availability, and this blog post from ourselves announcing VA and data mashups on BICS well before they became available on on-premise. In fact we’re almost at the point now where it’s conceivable that whole on-premise OBIEE systems can be moved into Oracle Cloud now, with my main Openworld session on just this topic - the primary end-user benefit being first to access the usability, self-service and data viz capabilities Oracle are now adding to their BI platform. 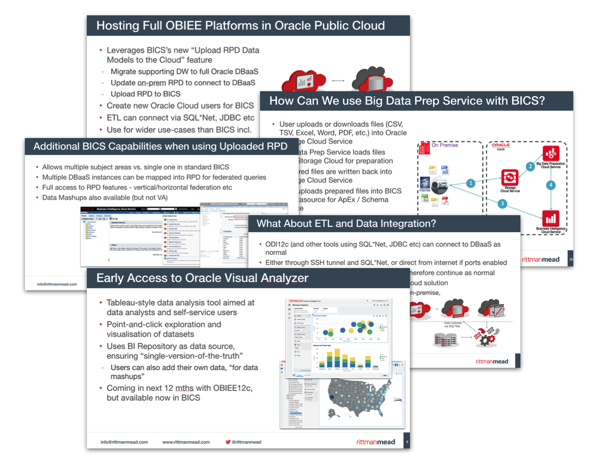 Moreover, DVCS is probably just the start of a number of standalone, on-premise and cloud VA derivates trying to capture the Tableau / Excel / PowerBI market - pricing is more competitive than with BICS but as Oracle move more downmarket with VA it’ll end-up competing more head-to-head with Tableau on features, and PowerBI is just a tenth of the cost of DVCS - I see it more as a “land-and-expand” play with the aim being to trade the customer up to full BICS, or at least capture the segment of the market who’d otherwise go to Excel or Tableau desktop - it’ll be interesting to see how this one plays out.

So that’s it for Part 1 of our Oracle Openworld 2015 roundup - tomorrow we’ll look at data integration and big data.