Apache Drill enables querying with SQL against a multitude of datasources including things like JSON files, Parquet and Avro, Hive tables, RDBMS and more. MapR have released an ODBC driver for it, and I thought it'd be neat to get it to work with OBIEE. It evidently does work for OBIEE running on Windows, but I wanted to be able to use it on my standard environment, Linux.

OBIEE 12c (and 11g and 10g before it) supports three primary ways of connecting to data sources:

To get OBIEE to work with Apache Drill we'll use the third option - native ODBC drivers. I'm doing this on SampleApp v511. For a geek-out on details of the process I went through and diagnostics used to get this to work, see here.

Update: Fiston has written up an excellent blog post showing how JDBC can be used to connect OBIEE 12c to Apache Drill - very cool!

Drill can be deployed in distributed configuration (with all the parallel processing goodness which that brings), but also run as a single instance locally. For the sake of simplicity that's what I'm going to do here. It's rather easy to do:

You need to make sure you've got a recent JDK available, and if you're running it on BigDataLite VM watch out for this odd problem that I had which was related to classpaths and maniested itself with the error java.lang.NoSuchMethodError: com.fasterxml.jackson.databind.JavaType.isReferenceType()Z.

All being well, you'll now have a Drill prompt:

From here you can run a simple query to check the version:

or query one of the built-in sample data sets:

For more examples of Drill, see the tutorials.

Setting up Drill ODBC on Linux with OBIEE

With Drill setup and running locally, let's now install the ODBC driver. This is all on SampleApp v511 / Oracle Linux 6.7.

In the above I've changed a few things:

On a Windows machine I installed the MapR Drill ODBC driver too and created a DSN of the same name as in my odbc.ini file above. In the Administration Tool I set up a new Database (type: ODBC Basic) and associated connection pool (ODBC 2.0) pointing to DrillDSN. 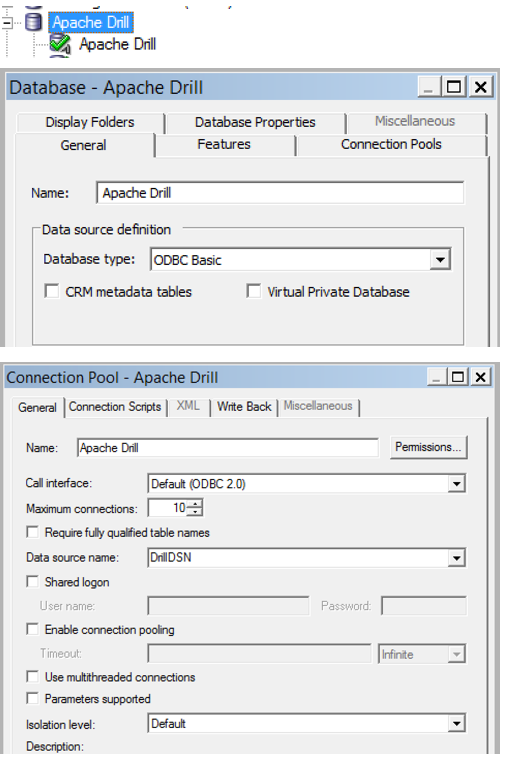 Now to try it out! In Answers I build a Direct Database Request: 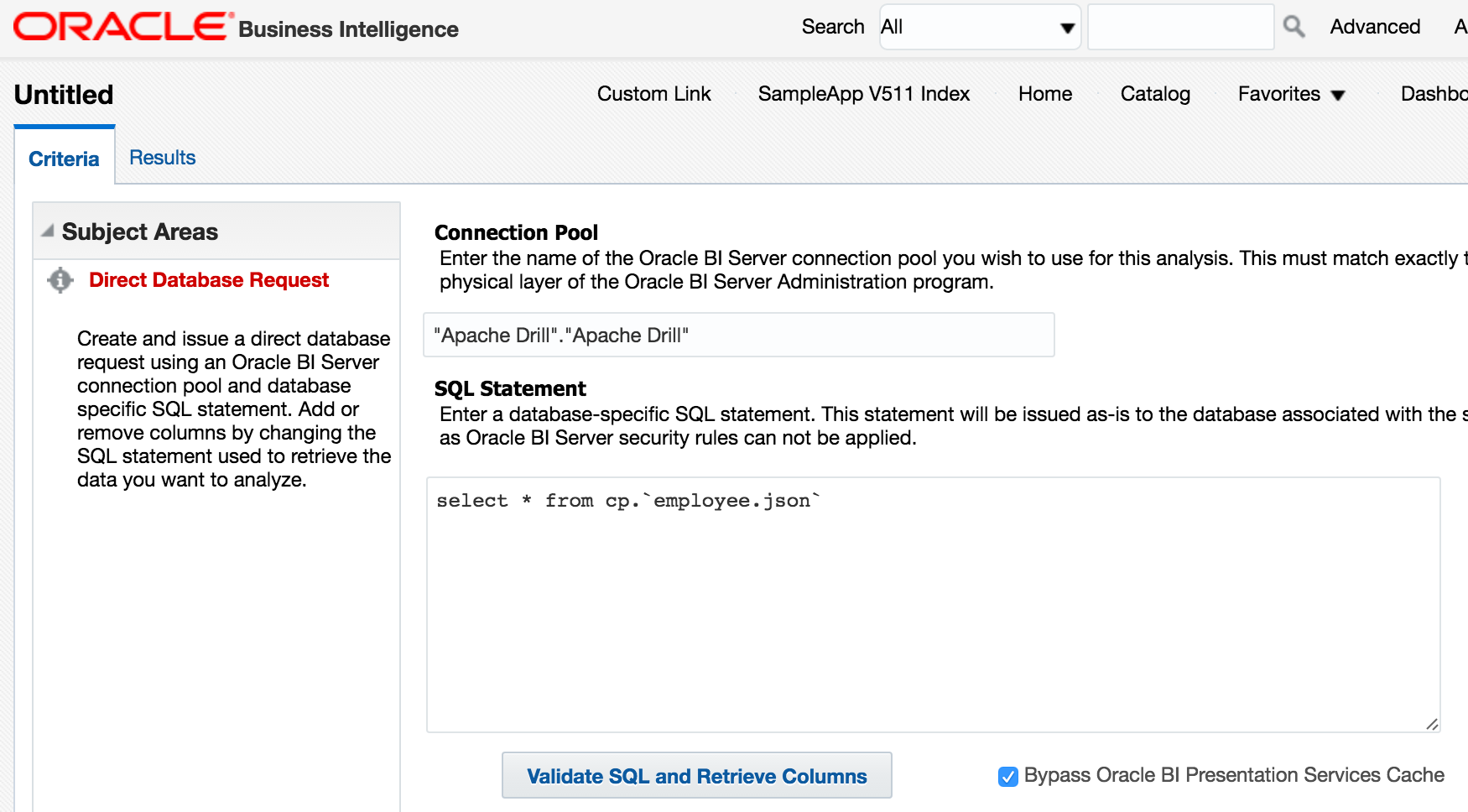 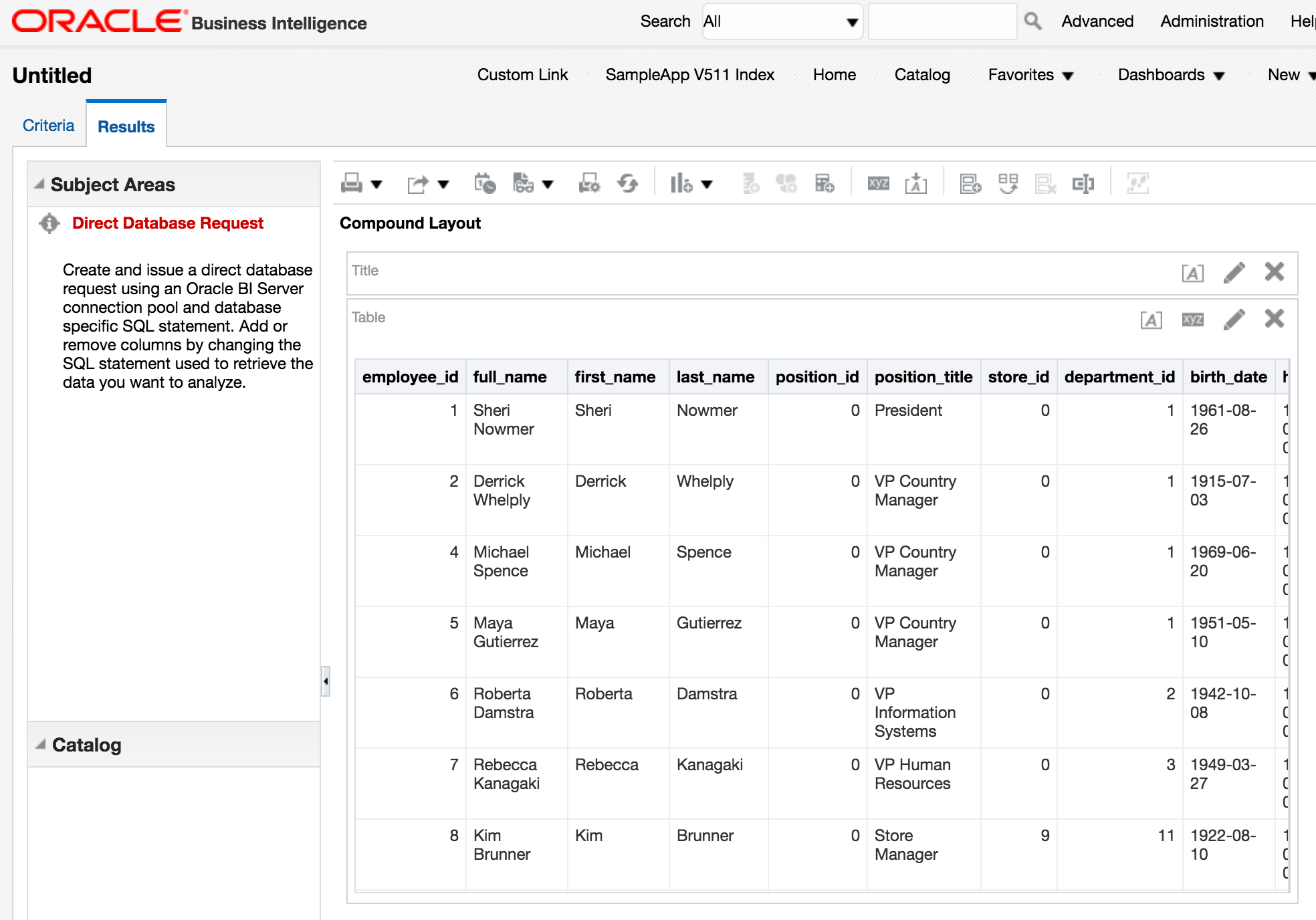 Nice. We can query data held in HDFS too, again with a Direct Database Request: 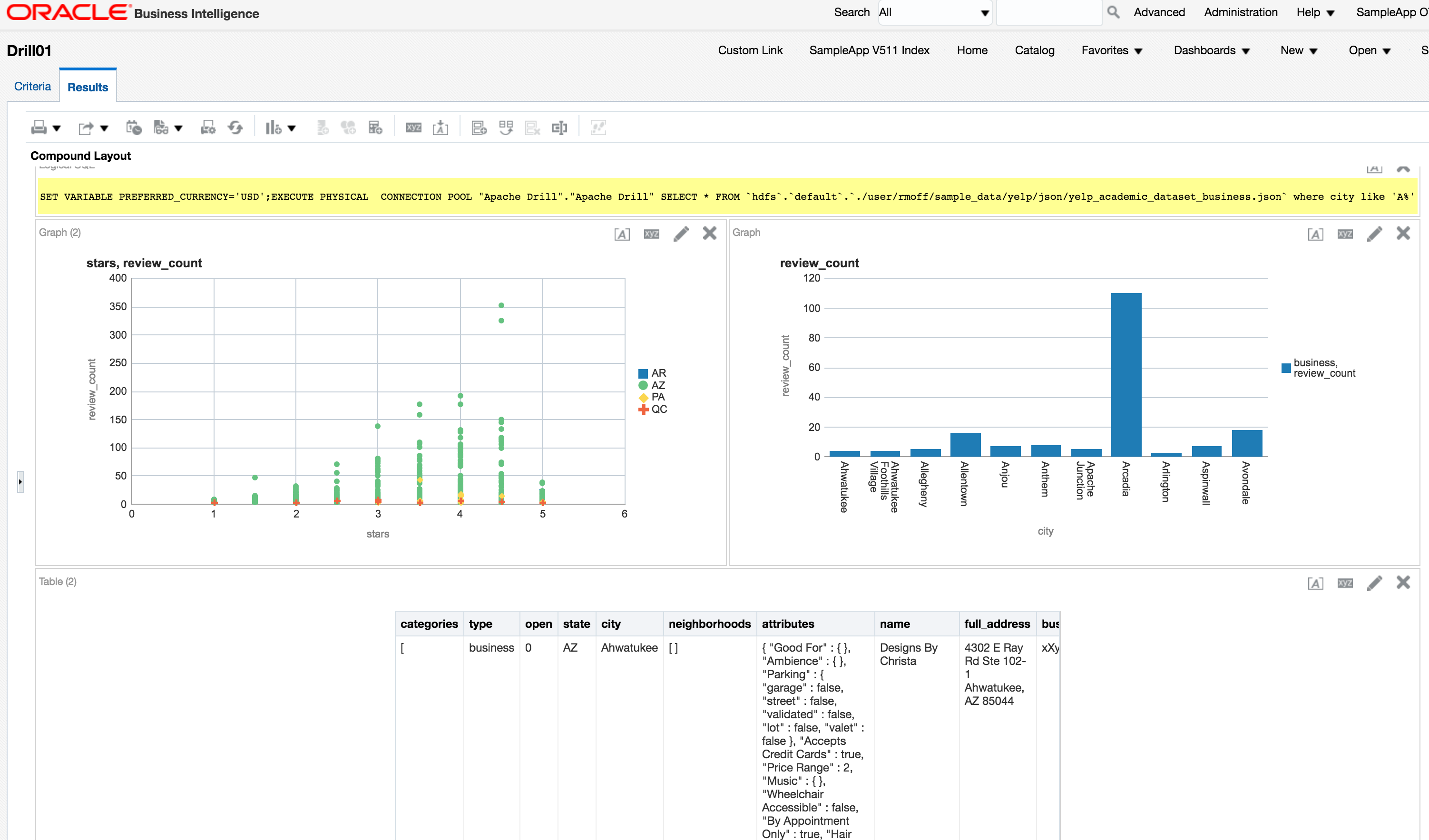 So the above DDR prove the connectivity works. But as any ful kno, DDR is at best a 'tactical' solution, at worst, a complete hack and maintenance nightmare. Let's use the force luke, or at least, the RPD. The first obvious thing to do is Import Metadata from the connection pool that we've defined. But doing this, there's no objects shown:

That's because 'tables' in Drill are not quite as clearly defined as in a standard RDBMS. A table could be a single file, multiple files matching a pattern, or even literally a table if connecting Drill to an RDBMS. So to expose a set of data through Drill, we define a view. This is where Drill Explorer comes in as it gives a simple GUI over the available files 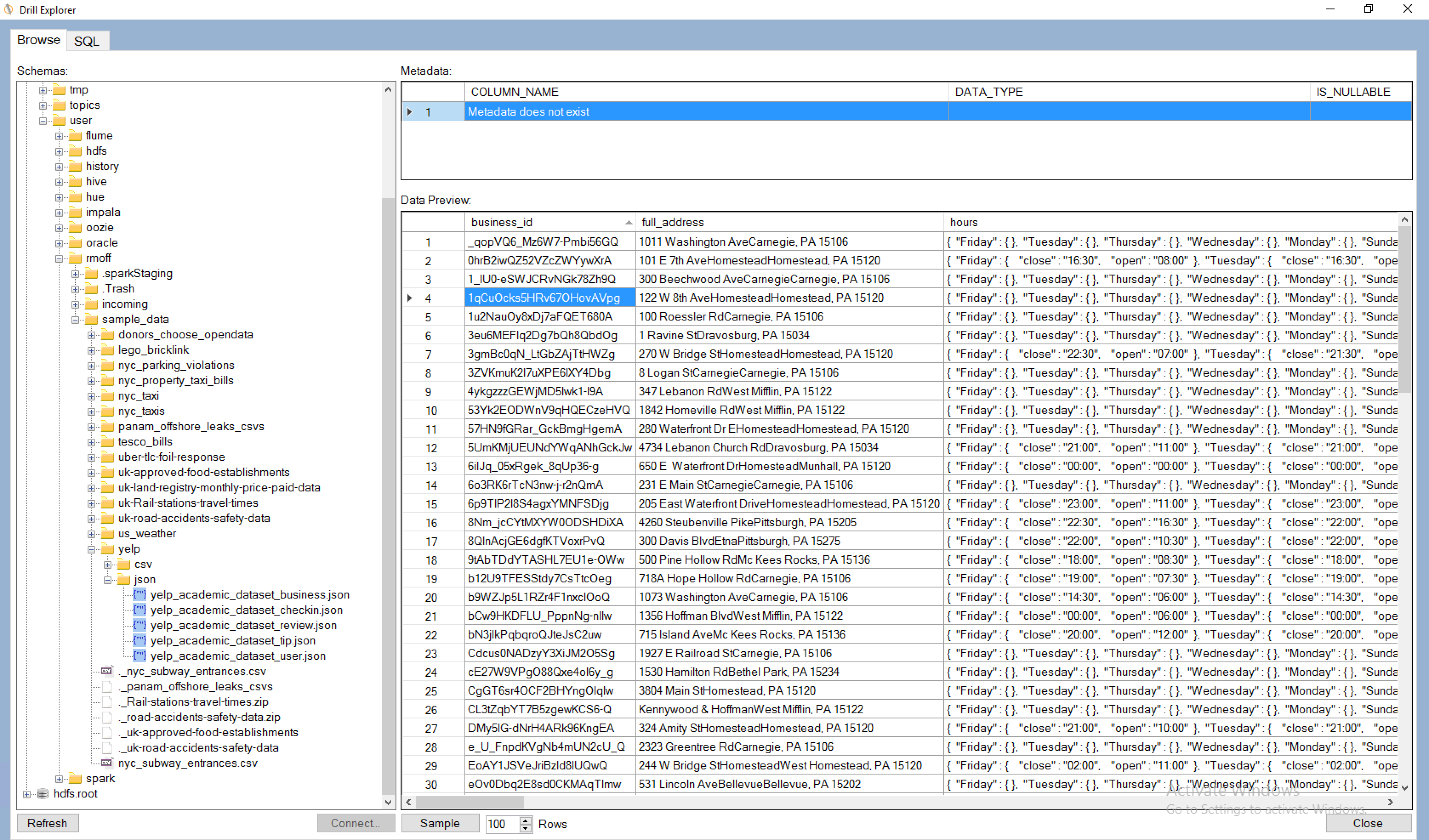 Having done this, launch the Import Metadata dialog again (right click the Connection Pool and select Import Metadata), and make sure you tick Views on the Metadata types to view. Now you'll see the object. Unfortunately, it just has a single column - *. I've not figured out yet how - if if it's possible - to get a view to explode out all columns in the underlying select clause. Import the view: 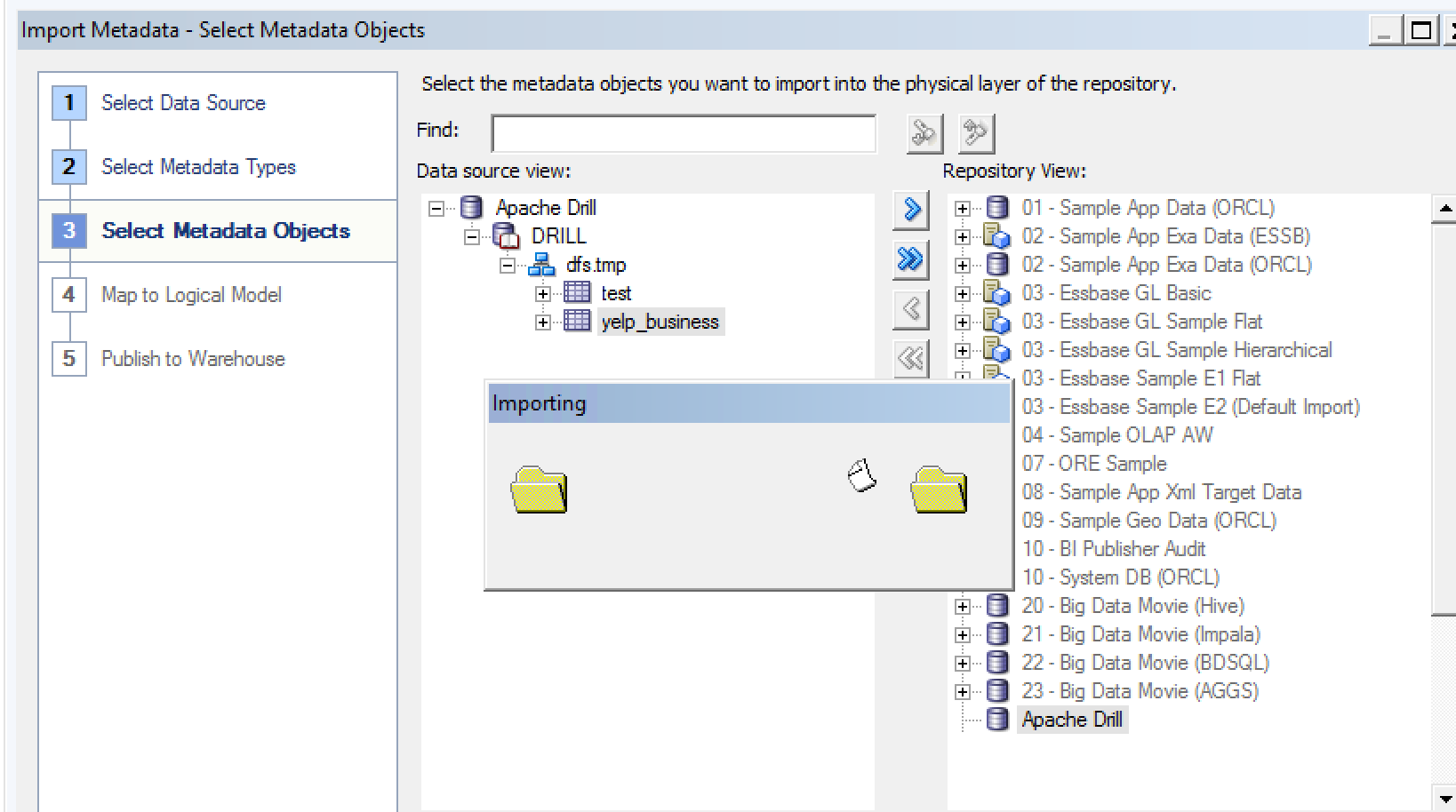 You'll get an error about the * column name, but the table and schema still get brought across. 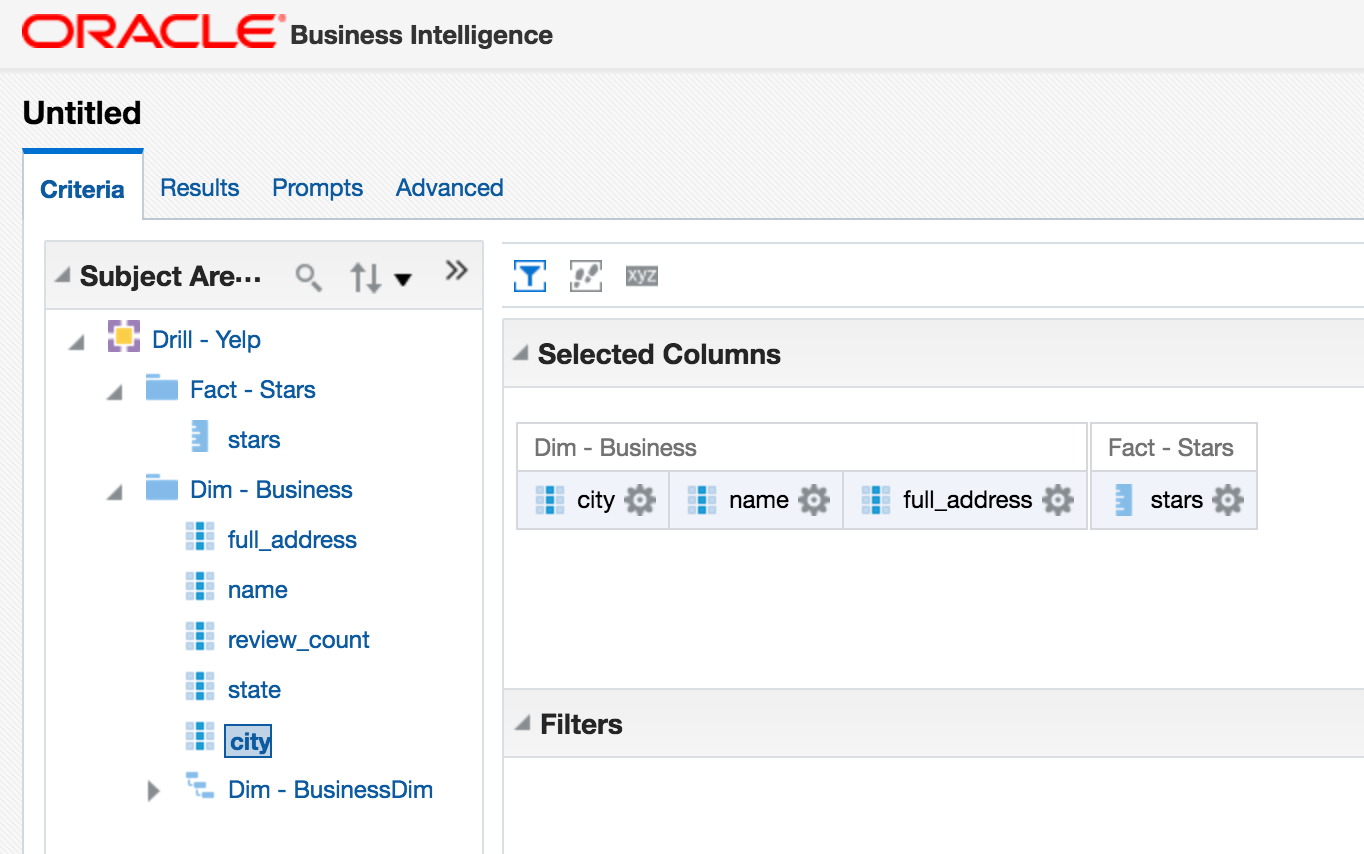 Looking at the query being run, OBIEE is using double quotation marks (") to quote identifiers, but Drill requires backtick (`) instead. Heading over to DB Features can fix this: 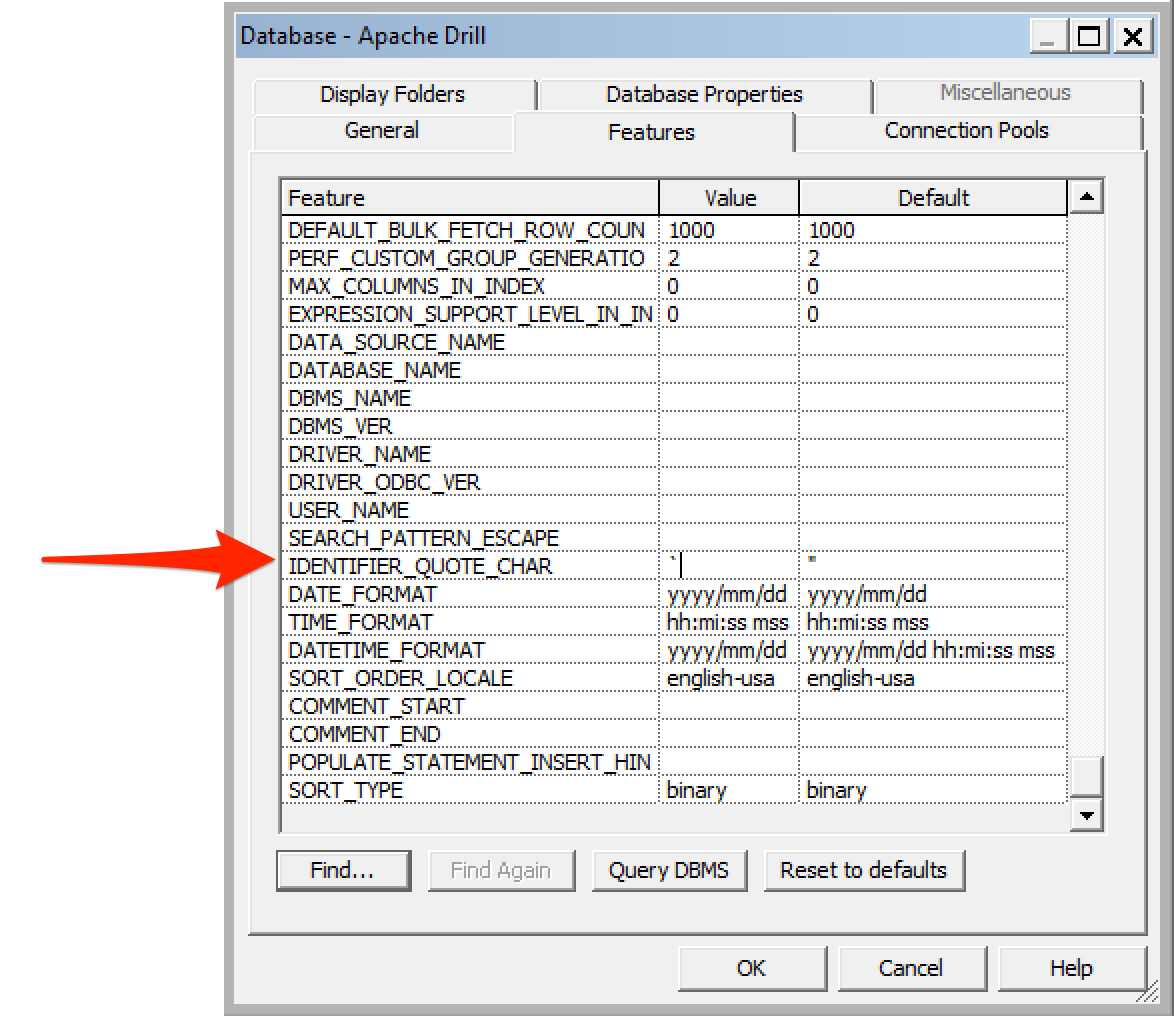 And refreshing the report gives:

This is the very basics necessary to get up and running with OBIEE and Apache Drill. It would be good to see if there's an optimal, least-friction, way for getting tables in Drill exposed to OBIEE without needing to enter each physical column.

One of the many powerful features of Drill is being able to access nested and array JSON values, which I've discussed in my Introduction to Apache Drill post. The above examples just use root-level attributes, and could easily be expanded out to process some of the nested fields (such as hours in the business data above). For the time being this would be done with DDR, or a Drill view wrapped around it imported into the Physical layer of the RPD.