The news hit the wires last night that Oracle were buying (certain assets of) Hyperroll, a technology company out of Israel with a head office in the USA. Hyperroll have been around for as long as I've been in Oracle BI consulting, and I knew them originally as offering an aggregation layer on top of Oracle Express (back in the pre-Oracle OLAP, pre-Compression days) that sped up cube rollups. According to Edward Roske they offered something similar to Essbase, until Hyperion brought out something suspiciously similar that became the Aggregate Storage Option. The introduction of ASO by Hyperion led to a patent infringement law suit that was in the end settled out of court, but that led to technology sharing and an investment in Hyperroll by Hyperion, which is probably where the germ of this deal came from.

These days, Hyperroll focused more on aggregating relational data sources, and branched out in to complementary areas such as real-time loading of financial management applications. From looking at the various press releases and FAQs, it looks like Oracle plan to position Hyperroll in the BI Foundation Layer within their EPM product stack, speeding up relational and OLAP queries and presumably supporting trickle-feed updates to their EPM applications. 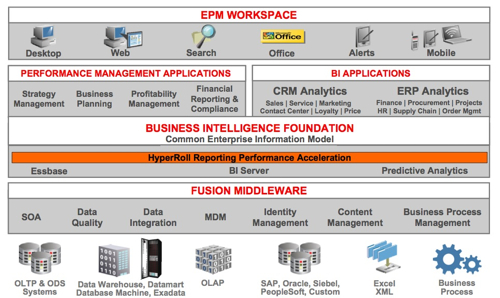 This looks like quite a neat fit, and if they can sell it as some kind of "BI Server" aggregation layer you've got the potential for MOLAP-style query and rollup speeds across the whole range of OBIEE and EPM data sources. Given Hyperroll's position in the market, their past support for Oracle OLAP/Express and Essbase and the relational nature of the BI Server this seems quite a clever acquisition on Oracle's part, and it wouldn't surprise me to see high-level mentions of it at Open World as part of the 11g BI and EPM stack. In terms of integration, I'd expect it to follow a similar pattern to TimesTen, where it's initially offered as a stand-alone option to Oracle BI Enterprise Edition initially, with full integration coming a few years later on perhaps as part of the integrated BI/EPM stack that Oracle are working on.

More details can be found in the press release, FAQ and in this set of slides.

Taking a Look at Panorama and Google Apps

I'm off to Copenhagen this evening to deliver a keynote at the Danish IT Society's Business Intelligence conference, and…