Well it's the last working day now before the end of 2011, and so I thought it'd be interesting to take a look back at the events of 2011, and a bit of think-forward as to what's on the horizon for 2012. As usual, it's been a very interesting and fast-moving 2011, with some new OBIEE releases, exciting trends in the industry, and lots of events all around the world.

From an OBIEE perspective, we started 2011 with the 11.1.1.3 release on general availability, and the 11.1.1.5 release made available about mid-way through the year. In hindsight, 11.1.1.3 was a bit of an "early adopter" release, with all the main functionality working but a few hassles around installation, upgrades and "fit and finish" issues. Many of our customers and partners adopted OBIEE 11g at this point, but quite a few held back for 11.1.1.5 which is generally considered a "fully-working" version (albeit with the usual bugs, issues etc that you get with any piece of enterprise software). Looking back at 2011, probably the biggest drivers for 11g adoption were Mobile (particularly the iPad client), the new Answers and Dashboards UI, and management via Enterprise Manager and WLST scripting. Without much fanfare, the Action Framework has also been widely adopted, but more for adding "missing functionality" such as Essbase writeback rather than integration with web services and workflows. Something I hear is going down well but don't see much evidence in the field is Scorecard & Strategy Management, though I would expect to see more of this as Oracle push "Oracle BI Foundation" as the base license deal rather than "Oracle Business Intelligence Enterprise Edition", as this will remove the price premium for scorecards (and mobile) and remove one of the hurdles for adoption.

As well as OBIEE 11g releases, we saw the 11.1.1.5 release of Oracle Data Integrator (review here, here and here), and confirmation that OWB is now at the end-of-the-line, along with Discoverer, with only maintenance releases coming along in future. Almost every new ETL project I see now is based on ODI (rather than OWB) so in the field, this was a de-facto change anyway, though it'll be interesting too see what options emerge for OWB customers looking to migrate to ODI - keep an eye on this blog as we'll be running a seminar in London in February on just this topic.

2011 was also the year we ran our third-ever Rittman Mead BI Forum, running again in Brighton and also this time, in Atlanta in America. I was very pleased to be joined by Tony Heljula for the one-day Masterclass before each event, where we talked about OBIEE 11g topics such as architecture, data modeling, SOA integration and Spatial Integration; Tony's a great speaker and it was fun to collaborate on the topics and deliver them together over the two locations. Next year, Kevin McGinley from Accenture is delivering the masterclasses, and he'll be known to our US readers as winner of the "Best Speaker" award at last year's US BI Forum, and "Best Paper" award at ODTUG KScope'11. The call for papers for next year's BI Forum is now open, and running until the end of January, so if you want to propose a session for either the UK, US or both events, take a look at the announcement page now!

Rittman Mead were certainly out on our travels in 2011, with our OBIEE 11g Training Days events running in the first half of the year in Atlanta (twice), Bangalore (Twice), London, Johnannesburg and Brussels, and our team speaking at events such as Collaborate'11 in Orlando, UKOUG 2011 in Birmingham, ODTUG KScope'11 in Long Beach, Oracle Open World in San Francisco, ODTUG BI/EPM Symposium in Sydney, AIOUG Sangam'11 in Bangalore, DW Global Leaders' events in Athens, Rome and San Francisco, and plenty of others I've probably forgotten. 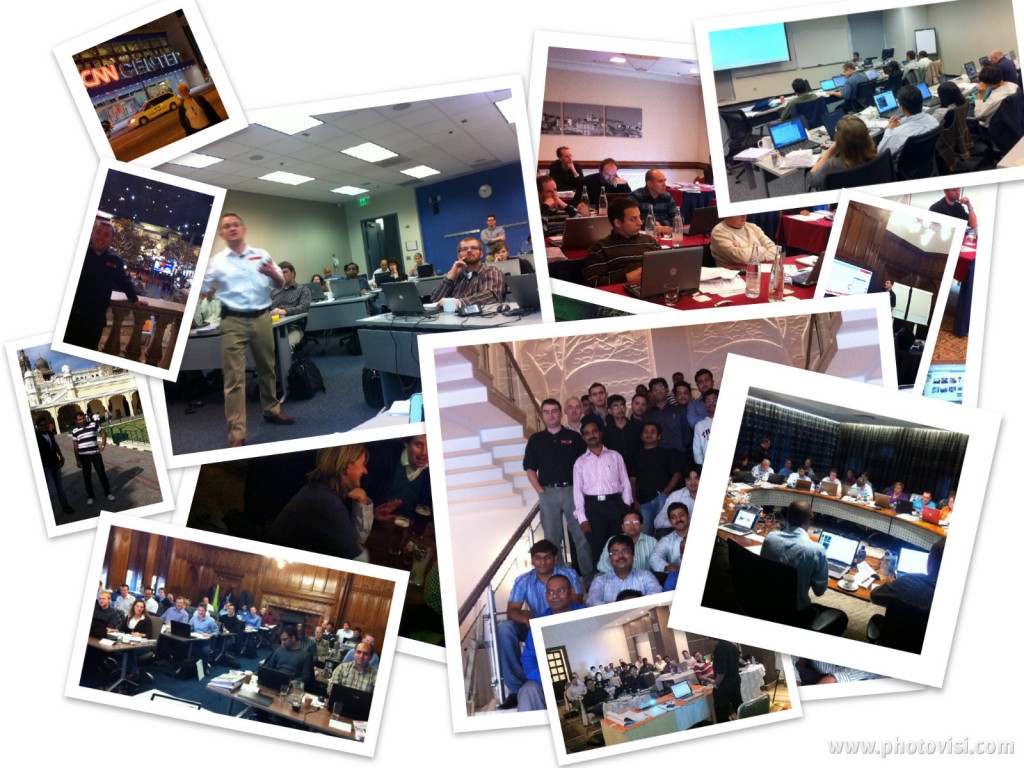 We encourage all of our staff to speak at conferences and our policy is that, if you get a paper accepted anywhere, we'll give you the time-off to speak and cover your expenses. Thanks also to the Oracle ACE and Oracle ACE Director Program and to Vikki, Lillian and Justin at the Oracle Technology Network, who've funded a lot of my speaking engagements on behalf of the ACE Director program, and who provide complementary Open World attendee passes for myself as an ACE Director and our Oracle ACEs, Stewart Bryson and Venkatakrishnan J.

It's also been a year where many of our staff have started to gain a name for themselves as specialists in certain areas. Stewart Bryson, for example, has been speaking and writing all year about real-time BI, and the new development paradigm that you can adopt when combining Exadata, OBIEE and Agile methodologies, whilst Venkat has been building on his reputation as the "go-to" expert for OBIEE and Hyperion Integration. Borkur has spoken at several conferences on Oracle Golden Gate, whilst Mike Vickers is getting a name for himself as a speaker on BI methodologies. Behind all these experts though is our team of BI, DW and EPM enthusiasts, taking this message and their own particular skill-sets to our customers around the world, sharing what we've learned and hopefully "raising the bar" for customer implementations.

For Rittman Mead as a company, it's been an exciting year with lots of growth. We've now got offices in the UK, US, India, Brussels and Australia, new training centres in Brighton and Bangalore, and we've been winning awards such as the UKOUG BI Partner of the Year award 2011/12. Thanks again to all of our customers, partners and staff, and I'm looking forward to getting out again and visiting our various country offices in 2012.

So what about 2012? What are we likely to see, both from Oracle, from the industry in general, and from Rittman Mead? Well, from an OBIEE perspective, we'll most likely see the 11.1.1.6 release fairly early in 2012, with probably a minor release (11.1.1.6.1?) sometime later in 2012, going on how Oracle do OBIEE releases at the moment (one major, one minor, each year). Going on from 11.1.1.6, there's some general themes that Oracle are working to with OBIEE:

There are also some general industry trends that we're also very excited about for 2012. Real-Time BI (in it's many forms) is becoming more and more "the expected norm", but there are lots of challenges in terms of how we do data movement/ETL, how we present a consistent set of numbers to users, how we may meaningful decisions based on data that's come in a few seconds ago, and how do we present what can potentially be large amounts of sensor-driven, machine-captured "big data" to users without them becoming overwhelmed by data?

Unstructured data will most certainly be something Oracle will be talking about a lot in 2012 following the acquisition of Endeca, with my prediction being that a future version of the OBIEE 11g BI Server will support Endeca as a data source (but how will Endeca's data be modelled as a star schema?), and Endeca Latitude front-end features being gradually incorporated into OBIEE 11g's front-end, in the same way that Hyperion WebAnalysis and Oracle Discoverer features have made their way into the 11g release. I'm not sure Endeca / Unstructured data will ever be "mass market", but it's an obvious acquisition for Oracle and I'll be looking forward to seeing unstructured data features making their way into Oracle's BI platform.

Another area we'll be focusing on in 2012 will be in-memory BI. Exalytics is just around the corner, and the new version of TimesTen that it'll ship with, plus the in-memory version of Essbase, should make split-second, lightning-quick analysis of large sets of data a possibility. The biggest barrier I see to user adoption (well, apart from data quality) is slow queries on dashboards, so Exalytics's in-memory databases plus the 1TB of RAM it'll ship with will be definitely welcome. But how well will in-memory combine with real-time, and how will the TimesTen in-memory database perform compared to Exadata, OLAP + materialized views, or even the file-based results cache that OBIEE already comes with? Check out our presentations at RMOUG Training Days in February, and the Hotsos Symposium in March, for the results of our testing. 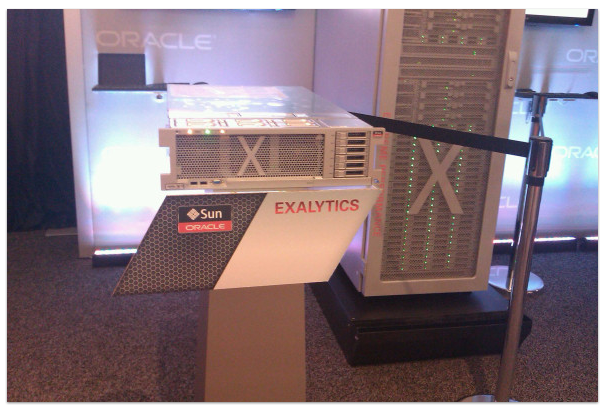 The BI Apps is also an area that's due for a lot of changes in 2012. BI Apps 11g is already out, but you'd be forgiven for not noticing, as up until recently it's been on controlled release, and it still only covers the Fusion Applications as a data source, with support for Apps Unlimited (EBS, Siebel, PSFT etc) coming in the next 12 months or so. We should also start to see some innovation in the product itself, with closer integration with OBIEE in terms of pushing through customizations, integration with Essbase and HFM, and general reduction in the workload in terms of upgrades, data loading and team development. Probably for most existing BI Apps 7.9.x + Informatica customers, not much will be happening in the next 12 months, but keep an eye on product announcements and expect lots of activity in 2013.

Cloud-based BI is a particular interest of the company and in particular Jon Mead who presented on the topic at Open World last September, based on trends towards cloud-based applications in the industry and demand from customers to simplify their systems and reduce their costs. We'll be introducing an "Exalytics in the Cloud" option in 2012, offering customers the ability to access our cloud-based Exalytics machine and replicate, via GoldenGate, their data into our hosted, secure environment and have us manage their BI system. As always, the challenges with BI in the cloud are firstly, replicating large amounts of data securely into the cloud, and secondly, trusting a vendor to manage your data for you, but ETL technology and bandwidth are making the first less of an issue, and for the second, a proper "best practices", always-patched, 24x7 monitored remote system is often more secure and better managed than something in-house. Look out for lots on this from us over the next 12 months.

We'll be speaking at lots of events in 2012, including RMOUG Training Days in Denver in February, Hotsos Symposium in Dallas in March, Collaborate'12 in Las Vegas in April and ODTUG KScope'12 in San Antonio in June. Keep an eye on our Events page for dates as they are announced, and also on our Public Scheduled Training Events page for details of OBIEE 11g, ODI 11g and BI Apps 7.9.6.3 courses running regularly at our training centres in Brighton, Atlanta, Bangalore and Melbourne.

Finally - at last, 2012 will be the year that my book is released. I've had some excellent support and co-operation from the Oracle Product Development team over the past few months, and so the book will be bang-up-to-date when it comes out, covering 11.1.1.6.x and Exalytics and including all the new visualizations, team development features, security capabilities, scorecard features, and data source support that'll be around in the second half of 2012 when the book comes out. I've now written 12 of the 15 chapters, writing the Answers + Dashboards chapter over Christmas, and I've just got Security, Clustering and High Availability and Scorecards & KPIs to write, plus all of the technical edits from Mike Durran and Venkatakrishnan J to incorporate, plus adding new features introduced in 11.1.1.6 since the original chapters were written against 11.1.1.3 and 11.1.1.5. Expect to see the book on the shelves at the Oracle Open World bookstore, and a return to more regular blogging from me once I've finished the book and all the NDAs are lifted!

So that's it from me now - Happy New Year to you all from Rittman Mead in the UK, Europe, USA, India and Australia, and see you all again hopefully in early 2012.

In the previous post, I laid the groundwork for describing Extreme BI: a combination of Exadata and OBIEE delivered…