Well, after the minor news that OBIEE 11.1.1.6 was finally released yesterday (and a very late night last night), it's back to Endeca week, with us today look at how Endeca's product line will fit in with Oracle's BI, data warehousing and EPM tools. In the first two postings in this series, we looked at Endeca's product line prior to the Oracle acquisition, and yesterday we took at closer look at MDEX, the hybrid search/analytics database that powers the Endeca product line. Here's a recap of this week's posts:

So how will the various Endeca products fit in with what Oracle have already got, and where will they add new capabilities that haven't been possible before?

As we saw on Monday, Endeca had two main product lines; Endeca Infront, an e-commerce/faceted search product that's used as the underpinnings to websites such as Autotrader.com, HMV.com and Sony's e-commerce site, and Endeca Latitude, a BI tool based on the same MDEX technology as Infront but positioned as a more general purpose, search/discovery platform. The plan therefore is to use Infront alongside Oracle ATG, Oracle's own e-commerce product line, whilst Latitude will be rebranded as Oracle Endeca Information Discovery, to better emphasize the search/discovery aspect of the tool. 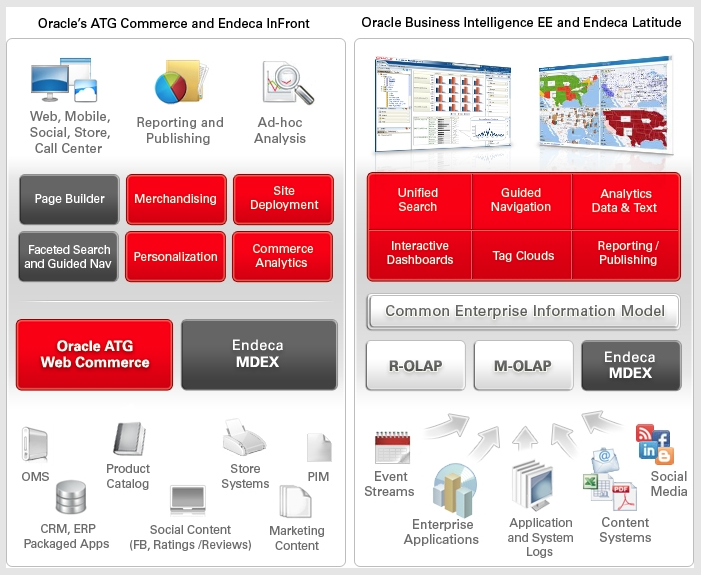 So putting Infront aside for the moment, how will Latitude/Information Discovery fit in with Oracle's own BI, EPM and DW product line - will it replace OBIEE, will OBIEE replace it, or is the some way they'll all be integrated?

From my understanding, there's several ways in which Endeca and Oracle BI technology will come together:

For me, the most promising integration possibility is bringing OBIEE data into the Endeca Server (MDEX) and using it, along with other structured, unstructured and semi-structured data to create data discovery dashboards and "mashups". You can imagine this as an interesting type of integration - the Endeca Latitude-style data discoverery interface with search, faceted navigation, tag clouds and so on, coupled with BI components such as graphs, tables, pivots and so forth sourcing jagged data from sources such as social media feeds, product catalogs, ERP data, analytics data from a warehouse and so on - all running at high-speed on an Exalytics box. Sounds very interesting.

The other aspect that I think Endeca Latitude/Data Discovery will bring to things is around Agile BI; recently, we've been talking about using OBIEE and Exadata in an agile way, harnessing OBIEE's semantic model and the sheer horsepower of Exadata to avoid the need to pre-summarize data, but OBIEE itself is still a fairly significant install, and the process of creating a formal dimensional model is still a brittle process; with Endeca Latitude/Data Discovery, the install (currently...) is still fairly lightweight and the dimension model emerges and adapts as you add more data to the model. I can definitely see an "agile BI" role for Endeca's products within Oracle's technology stack, something that'll appeal to the Qlickview-style audience who want fast ROI, a lightweight footprint and minimal data modelling.

So, to round our Endeca week off, we'll be concluding the series with a look at the development process for MDEX databases and the Studio front-end. Check back tomorrow for the next installment.