Around three weeks ago Rittman Mead took delivery of our Oracle Exalytics server, the first Oracle Partner in the UK to do so. It's located in a secure datacentre in London, with a fast secure link through to our offices in Brighton, where we're carrying out testing and running "proof of concept" exercises for our customers. Borkur and Robin worked closely with Oracle Advanced Customers Services, and Mike Durran in the BI Product Management team, to get the server up and running over a couple of days, and here's a couple of photos taken while the installation took place:

A typical Exalytics server (in the supported configuration) has the following software installed on it:

This allows you to run a single repository (RPD) and catalog within the single BI instance provided by the OBIEE 11g install, with a product architecture that looks like this: 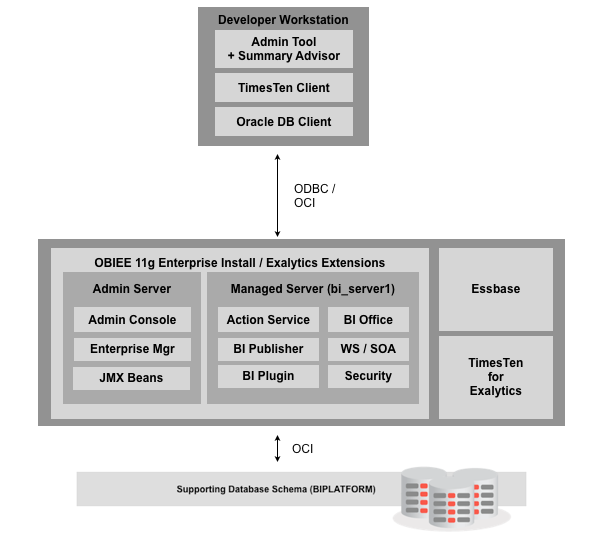 The installation itself took place over two days, with the first day used for racking up the server in the datacenter, and the second for installing the software. The server itself arrives from the factory with just the Oracle Linux OS installed, and Oracle ACS then set up and install the OBIEE, WebLogic, TimesTen (and if you're using it), Essbase software, configuring an initial TimesTen database and then connecting it to the Oracle BI Server. It's then down to the customer (or a partner such as ourselves) to connect TimesTen to your BI repository, enable usage tracking and summary statistics, and start running the Summary Advisor to create the in-memory aggregates.

As we're primarily using the Exalytics Server for customer PoCs, we've set ours up a bit differently to the supported configuration, with four OBIEE 11.1.1.6 installations in separate middleware homes so we can run BI instances simultaneously. We're also planning on installing Endeca Information Discovery on the box, so we can take advantage of the memory on the server and upcoming integration with OBIEE. Essbase will also be going on there shortly, and we've also put an Oracle database on there, with one instance for the RCU schemas, and others for customer PoC data as required. Finally, access is through a VPN and firewall, allowing us to lock down the machine but make environments available as required, using a Juniper firewall/router. 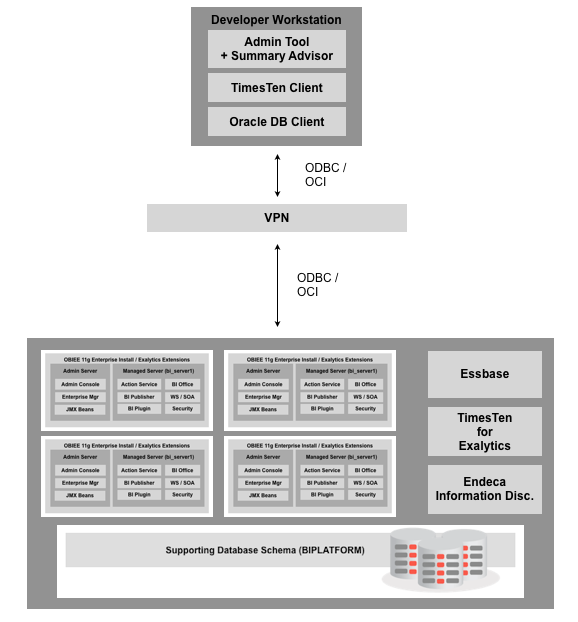 Note that that is not a supported configuration, and it's something we've put together to test options for running multiple repositories and catalogs at the same time - don't take this as Rittman Mead guidance on how to host multiple BI instances on the same box. That said, we're thinking one of the major use-cases for Exalytics will be server consolidation, so it'll be useful to test out how practical it is to run multiple BI instances on the same box.

We've also got a testing area set aside for ourselves, so look out for blog postings over the next few months as we put Exalytics through its paces. We're particularly keen to work out the "sweet spot" for TimesTen in-memory aggregations, particularly in comparison to aggregations in the in-memory Essbase cube, and work out just how practical it is to create a "hotspots" cache for a very large data warehouse, and keep those cache entries fresh as new data comes in. As the Exalytics releases come in, we'll also be trying out the new visualizations and also integration with products such as Endeca Information Discovery.

In the meantime, we've been giving the box a spin using some demo datasets, including one that contains all scheduled airline flights in the USA over the past thirty years, and details of any delays that they incurred. The dataset contains around 120 millions rows of data and is analyzed across multiple dimensions including route, airline, origin and destination airport, and time. Even thought there's a vast amount of data in the back-end database, Exalytics provides a split-second, speed-of-though analysis environment with the TimesTen for Exalytics In-Memory Database working as the mid-tier, in-memory cache. 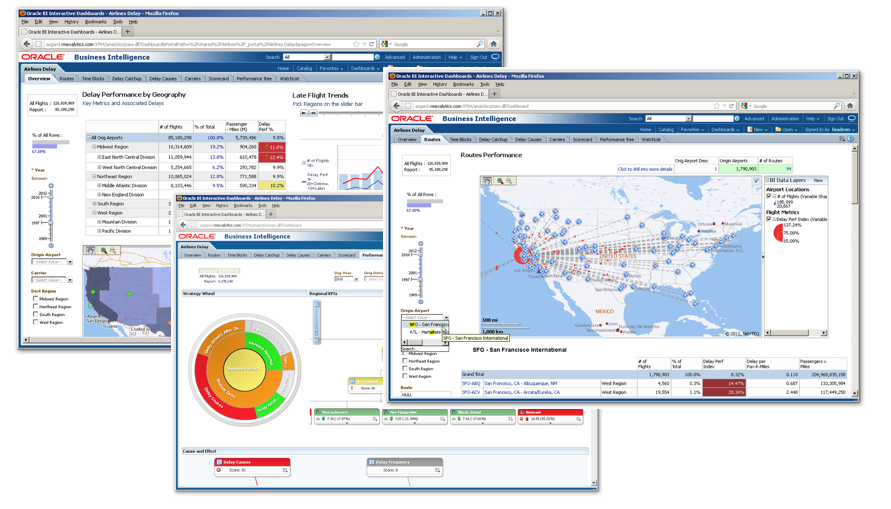 We've also got a bunch of demos built around the new SampleApp to show off the Summary Advisor, and a demo that simulates thousands of concurrent users running random queries with no drop in response time. Keep an eye on our Exalytics page as we post videos of these, and other demos, over the next few months. Also, if you're coming to either of the Rittman Mead BI Forum events running in Brighton this week, and Atlanta next week, I'll be running demos at various points.

Finally, if you're interested in finding out how Exalytics can make your organization's dashboards run faster and provide a richer, more interactive query environments, drop us a line at exalytics@rittmanmead.com to give your dashboards a spin on our test box!

With the recent delivery of the Rittman Mead Exalytics server, I have been fortunate enough to be spending time…

Here at Rittman Mead we’re all looking forward to the BI Forum in Brighton this week.  Although before…