Whilst this blog is most well known for articles on OBIEE, ODI, Essbase and data warehousing, many of the projects we work on are actually Oracle BI Applications implementations, out of our offices in the UK, India, USA and Australia. Recently we're getting asked more and more about the product roadmap for the BI Applications, with questions typically around whether ODI will be supported going forward, whether ODI will actually replace Informatica, and whether customers can actually upgrade to BI Applications 11g now. So over the next three postings, I'll be looking at what's coming up for the Oracle BI Applications, answering some questions around migrations and technology platforms, and looking at what we can do as customers and developers to get ourselves ready for BI Apps 11g.

I'll add the links in as the postings are published, but here's the topics and links for the other parts of the series:

Now though, there are three distinct development branches of the BI Applications, and a fourth one that had just one release and then ended:

Those of you with long memories might also remember a branch of the BI Apps back in 2009 that sourced data from Oracle EBS but used Oracle Data Integrator as the data integration tool; Oracle BI Apps 7.9.5.2 turned out to be a one-off release though, with no further modules, sources or targets covered, but was interesting as a preview of how Oracle might tackle an eventual move to ODI as the ETL tool, and also it highlighted those areas where ODI didn't have the required functionality to replace Informatica. We covered the 7.9.5.2 release in quite a bit of details when it first came out, and you can read some background to it in four blog posts that set out an introduction to the release, technology changes to accommodate ODI as an alternative to Informatica PowerCenter, data loading and customisation.

Oracle have also stated some long term plans and objectives for the BI Applications:

As of Collaborate'12 in April 2012 in Las Vegas, the current release roadmap for these three development branches was presented by Florian Schouten, Oracle's Senior Director, Product Management/Strategy in charge of BI Apps as looking like this: 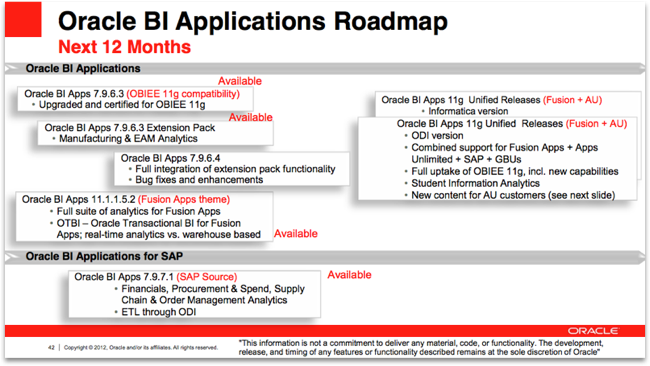 What this is telling us is a few things:

This has a few implications and things to be aware of:

Going forward from this point, the plan is to offer all modules and all sources through both Informatica and Oracle Data Integrator, with no forced migration from one to the other. SAP customers using the 7.9.6.x product will stay for the time being in their own development stream, continuing to use ODI as their data integration engine, with the aim being to merge the SAP stream back into the BI Apps 11.1.1.x series in due course.

So now we know a bit more about the roadmap, what does Oracle BI Applications 11g look like, and what new end-user, development and administration tools can we expect to see? Stick around for a couple of days and we'll cover this topic next in the series.