Enterprise Manager 12c is the latest and greatest incarnation of Oracle’s toolset for Enterprise Management (the clue’s in the name), of which Cloud Control (neé Grid Control) is one of the key tools. It can be used for a unified overview of disparate services including servers, databases, and of course OBIEE. Monitoring and alerting is core to EM12c, as well as extremely flexible management of any problems that arise. EM12c also offers natively all of the control and configuration functionality for OBIEE that exists in its sibling that is installed with all OBIEE installations, Enterprise Manager Fusion Middleware Control.

On this blog Mark Rittman wrote in detail about the EM12c in a series of three posts (here, here and here), and Adam Seed gave a detailed example here of how to monitor OBIEE availability using a user login simulated through a "Web Transaction" test.

In this post and the next I am going to expand on what my colleagues have covered, looking firstly at how we can use (dare I say, leverage) Usage Tracking data to drive monitoring and alerting of important areas such as response time and dashboard error rates, and secondly the incorporation of existing JMeter-based performance tests into EM12c.

EM12c has a learning curve associated with it. Just as you wouldn’t expect to grok OBIEE in an instant and a comprehension of the basics of the BI Server, an RPD, Answers, and so on will aid a good implementation, the same is true for EM12c. Just like with OBIEE's SampleApp, Oracle kindly provide a VirtualBox machine preinstalled & configured with EM12cR3 for you to test on. It's on eDelivery, linked to from here, listed under Oracle VM Templates (x86 64 bit), Part Number B73896-01.

Within EM12c objects are defined as Targets. These include servers (known as hosts), databases, database listeners, but also components of parent targets. For example, the overall FMW Domain for OBIEE is a target, but so is the BI Server and each individual java application deployment running on the WebLogic Server managed server (bi_server1) which is itself also a target 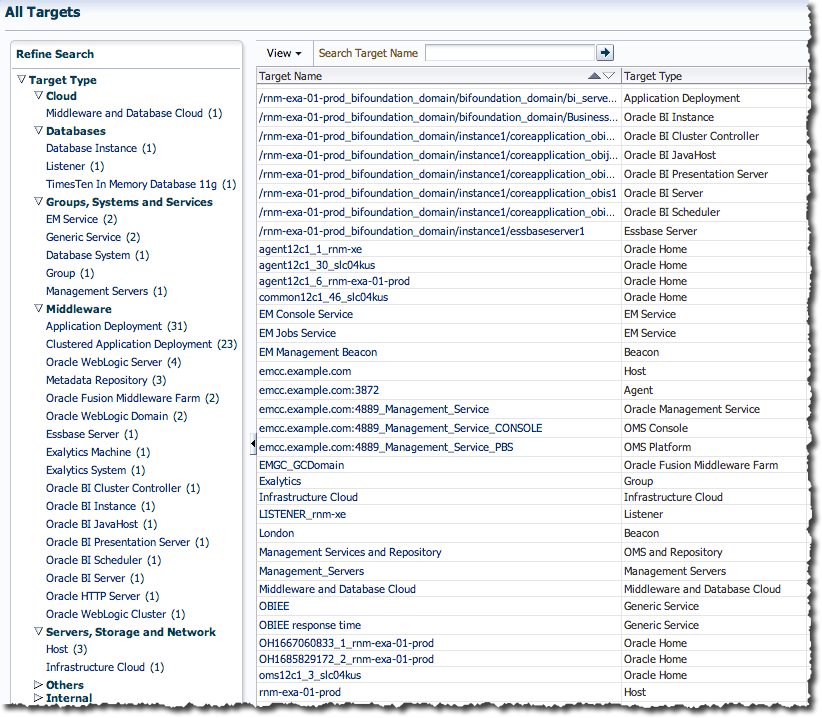 The data for targets is provided by an Agent typically running local to the target. The data consists of various Metrics which are Collected on a periodic basis. The frequency of a metric collection can be configured, with a different Collection Schedule per Metric. One metric that most targets will provide is Status and this particular metric is collected every minute by default. Other metrics are collected less frequently, from every 15 minutes up to once a day or less. 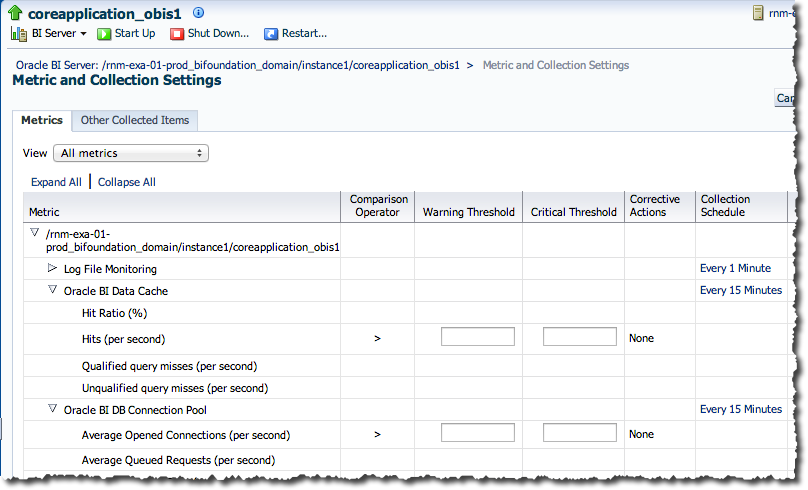 Alerts within EM12c are primarily handled through Incidents, which are concisely defined as “[…a] situation or issue you need to act on”. Incidents are created from the occurence of one or more Events, which are basically something (not necessarily 'bad') that has been measured by EM12c and deemed of interest.

The reference manual gives a nice illustration of how events and incidents are related, here.

A target’s metrics trigger Events through Thresholds, which can be defined at both warning and critical levels if required. The Status metric mentioned above will have a default Critical Threshold of “Down”, which is how EM12c will raise an alert for a component that is not running.

All of the above is core functionality provided by EM12c and in a sense generic to any target. Each target will have its own metrics for which thresholds can be defined, whether this is the OBIEE Presentation Services “Connection Pool Current Authentications” or the deadlock rate in TimesTen.

To provide flexibility in the monitoring that EM12c provides there is the concept of a Service. A Service can have one or more Service Tests defined within it, and these can be a variety of functions that return metrics, such as availability or performance data. From these metrics, thresholds can be defined just as they are against metric data from a pre-defined target, and thus events and notifications driven. A service test can be of many types, including:

In the remainder of this post I am going to explain how to build an EM12c Service Test based on Usage Tracking data to monitor and alert on things like failing dashboards and dashboard response times.

Usage Tracking is functionality available within OBIEE that logs every user request to the BI Server into a set of tables stored in the RCU (BIPLATFORM) tables. If you don’t have Usage Tracking enabled, you should - period. It’s easy to implement (see here for a step-by-step tutorial from Oracle), and provides a wealth of valuable data including when a report ran, which dashboard it was part of, how long it took, how many rows it returned, and even the query that was sent to the database to run it.

Usage Tracking consists of two tables, S_NQ_ACCT for the “Logical” query from the user and S_NQ_DB_ACCT for the “Physical” query (or queries) that get sent to the database. Both tables reside in the RCU (BIPLATFORM) schema and can be queried just as you would any table in the database. They can also be modelled into the OBIEE RPD and reported on through the front end, but that’s a separate topic (have a look at the superb SampleApp v309R2 for inspiration).

Knobbling the system to throw an error in OBIEE thus:

In the first part of this article, we discovered the new mappings and reusable mappings, the debugger and the…

This is the third post in the four part series on Oracle BI Applications 11.1.1.7.1…