In yesterday’s post I looked at Oracle Big Data Discovery and how it brought the search and analytic capabilities of Endeca to Hadoop. We looked at how the Oracle Endeca Information Discovery Studio application works with a version of the Endeca Server engine to analyse and visualise sample sets of data from the Hadoop cluster, and how it uses Apache Spark to retrieve data from Hadoop and then transform that data to make it more suitable for data discovery and data analysis applications. Oracle Big Data Discovery is designed to work alongside ODI and GoldenGate for Big Data once you’ve decided on your main data flows, and Oracle Big Data SQL for BI tool and application access to the entire “data reservoir”. So how does Big Data Discovery work, and what role does it play in the overall big data project workflow?

The best way to think of Big Data Discovery, to my mind, is “Endeca on Hadoop”. Endeca Information Discovery had three main parts to it; the data loading part performed using Endeca Information Discovery Integrator and more recently, the personal data upload feature in Endeca Information Discovery Studio. Data was then ingested into the Endeca Server engine and stored in a key/value-store NoSQL database, indexed, parsed and enriched, and then analyzed using the graphical user interface provided by Studio. As I explained in more detail in my first post in the series yesterday, Big Data Discovery runs the Studio and DGraph (Endeca Server) elements on one or more dedicated nodes, and then reads data in from Hadoop and then writes it back in transformed states using Apache Spark, as shown in the diagram below: 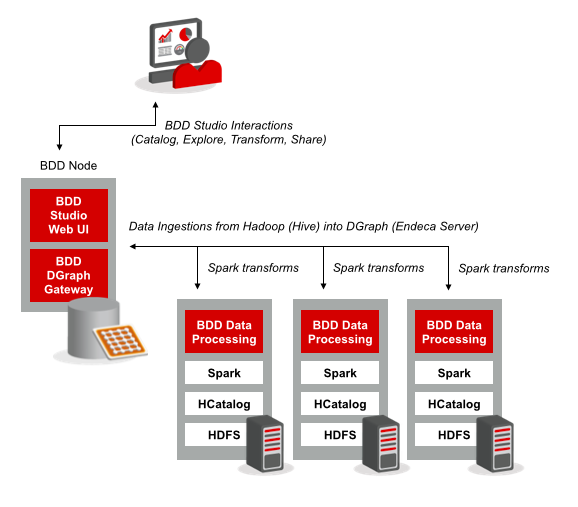 As the data discovery and analysis features in Big Data Discovery rely on getting data into the DGraph (Endeca Server) engine first of all, this implies two things; first, we’ll need to take a subset or sample of the entire Hadoop dataset and load just that into the DGraph engine, and second we’ll need some means of transforming and “massaging” that data so it works well as a data discovery set, and then writing those changes back to the full Hadoop dataset if we want to use it with some other tool - OBIEE or Big Data SQL, for example. To see how this process works, let’s use the same Rittman Mead Apache webserver logs that I’ve used in my previous examples, and bring that data and some additional reference data into Big Data Discovery.

For data to be eligible to be ingested into Big Data Discovery, it has to be registered in the Hive Metastore and with the metadata available to use by external tools using the HCatalog service. This means that you already need to have created a Hive table over each datasource, either pointing this table to regular fixed-width or delimited files, or using a SerDe to translate another file format - say a compressed/column-store format like Parquet - into a format that Hive can understand. In our case I can use the RegEx SerDe that I first used in this blog post a while ago to create a Hive table over the log file and split out the various log file elements, with the resulting DDL looking like this:

If I then register the SerDe with Big Data Discovery I could ingest the table and file at this point, or I can use a Hive CTAS statement to remove the dependency on the SerDe and ingest into BDD without any further configuration.

At this point, if you’ve got the BDD Hive Table Detector running, it should pick up the presence of the new hive table and ingest it into BDD (you can whitelist table names, and restrict it to certain Hive databases if needed). Or, you can manually trigger the ingestion from the Data Processing CLI on the BDD node, like this:

The data processing process then creates an Apache Oozie job to sample a statistically relevant sample set of data into Apache Spark - with a 1% sample providing 95% sample accuracy - that is the profiled, enriched and then loaded into the Big Data Discovery DGraph engine for further transformation, then exploration and analysis within Big Data Discovery Studio. 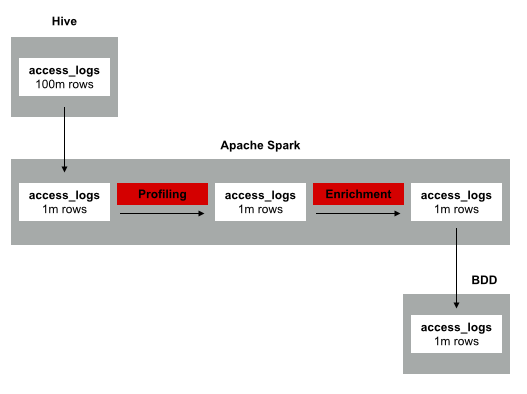 The profiling step in this process scans the incoming data and helps BDD determine the datatype of each Hive table column, the distribution of values within the column and so on, whilst the enrichment part identifies key words and phrases and other key lexical facts about the dataset. A key concept here also is that BDD typically works with a representative sample of your Hive table contents, not the whole contents, as all the data you analyse has to fit within the memory space with the DGraph engine, just like it used to with Endeca Server. At some point its likely that the functionality of the DGraph engine will be unbundled from the Endeca Server and run natively across the actual Hadoop cluster, but for now you have to separately ingest data into the DGraph engine (which can run clustered on BDD nodes) and analyse it there - however the rules of sampling are that if you’ve got a sufficiently big sample - say, 1m rows - regardless of the actual main dataset size this sample set is considered sufficiently representative - 95% in this case - as to make loading a bigger sample set not really worth the effort. But bear in mind when working with a BDD dataset that you’re working a sample, not the full set, so if a value you’re looking for is missing it might be because it’s not in this particular sample.

Once you’ve ingested the new dataset into BDD, you see it listed amongst the others that have previously been ingested, like this: 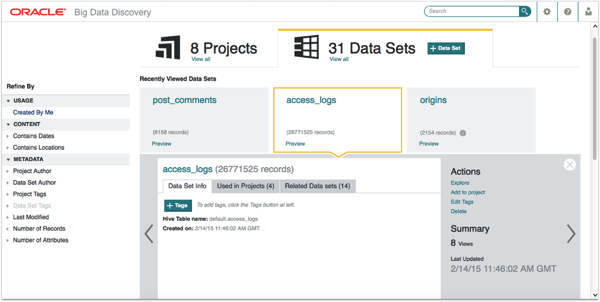 At this point you can explore the dataset, to take an initial look at the patterns and values in the dataset in its raw form. 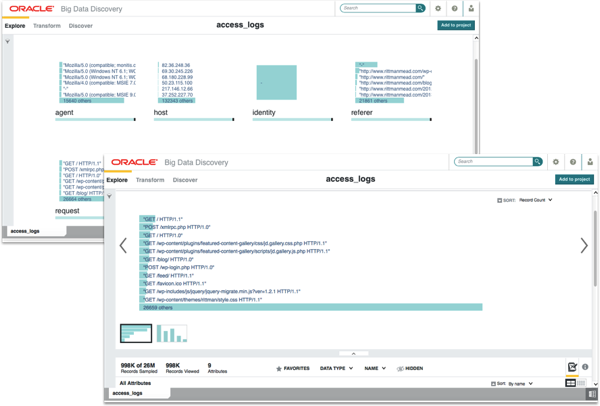 Unfortunately, in this raw form the data in the access_logs table isn’t all that useful - details of the page request URL are mixed in with the HTTP protocol and method, for example; dates are in strings; details of the person accession the site are in IP address format rather than a geographical location, and so on. In previous examples on this blog I’ve looked at various methods to cleanse, transform and enhance the data in log file tables like this, using tools and techniques such as Hive table transformations, Pig and Apache Spark scripts, and ODI mappings but all of these typically require some IT invovement whereas one of the hallmarks of recent versions of Endeca Information Discovery Studio was giving power-users the ability to transform and enrich data themselves. Big Data Discovery provides tools to cleanse, transform and enrich data, with menu items for common transformations and a Groovy script editor for more complex ones, including deriving sentiment values from textual data and stripping out HTML and formatting characters from text. 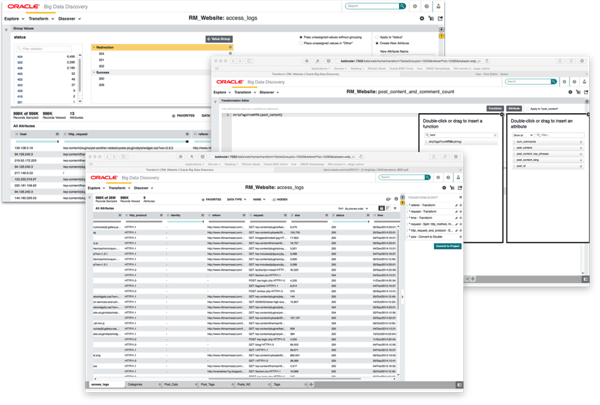 Once you’ve finished transforming and enriching the dataset, you can either save (commit) the changes back to the sample dataset in the BDD DGraph engine, or you can use the transformation rules you’ve defined to apply those transformations to the entire Hive table contents back on Hadoop, with the transformation work being done using Apache Spark. Datasets are loaded into “projects” and each project can have its own transformed view of the raw data, with copies of the dataset being kept in the BDD DGraph engine to represent each team’s specific view onto the raw datasets. 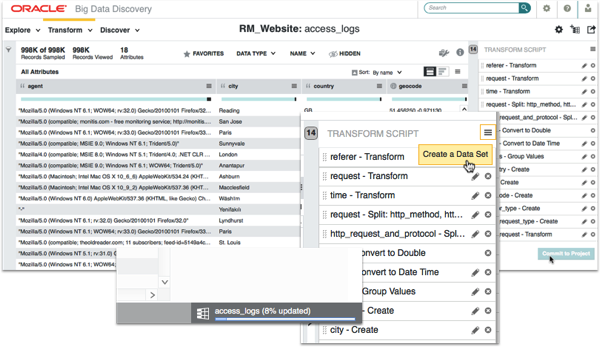 In practice I found this didn’t, at the current product state, completely replace the need for a Hadoop developer or R data analyst - you need to get your data files into Hive and HCatalog at the start which involves parsing and interpreting semi-structured data files, and I often did some transformations in BDD, then applied the transformations to the whole Hive dataset and then re-imported the results back into BDD to start from a simple known state. But it certainly made tasks such as turning IP addresses into countries and cities, splitting our URLs and removing HTML tags much easier and I got the data cleansing process done in a matter of hours compared to the days with manual Hive, Pig and Spark scripting.

Now the data in my log file dataset is much more usable and easy to understand, with URLs split out, status codes grouped into high-level descriptors, and other descriptive and formatting changes made.

I can also at this point bring in additional datasets, either created manually outside of BDD and ingested into the DGraph from Hive, or manually uploaded using the Studio interface. These dataset uploads then live in the BDD DGraph engine, and are then written back to Hive for long-term persistence or for sharing with other tools and processes.

These datasets can then be joined to the main dataset on matching dataset columns, giving you a table-join interface not unlike OBIEE’s physical model editor. 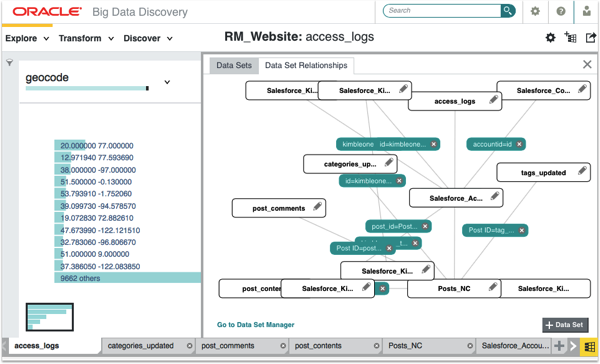 So now we’re in a position where our datasets have been ingested into BDD, and we’ve cleansed, transformed and joined them into a combined web activity dataset. In tomorrow’s final post I’ll look at the data visualisation part of Big Data Discovery and see how it brings the capabilities of Endeca Information Discovery Studio to Hadoop.