In the past, Robin Moffatt wrote a number of blogs showing how to use various Linux tools for diagnosing OBIEE and getting insights into how it works (one, two, three, ...). Some time ago I faced a task which allowed me to continue Robin's cycle of posts and show you how to use Wireshark to understand how a certain Oracle tool works and how to search for the solution of a problem more effectively.

To be clear, this blog is not about the issue itself. I could simply write a tweet like "If you faced issue A then patch B solves it". The idea of this blog is to demonstrate how you can use somewhat unexpected tools and get things done.

Obviously, my way of doing things is not the only one. If you are good in searching at My Oracle Support, you possibly can do it even faster, but what is good about my way (except for it is mine, which is enough for me) is that it doesn't involve uneducated guessing. I do an observation and get a clarified answer.

Most of my blogs have disclaimers. This one is not an exception, while its disclaimer is rather small. There is still no silver bullet. This won't work for every single problem in OBIEE. I didn't say this.

The problem was the following: a client was upgrading its OBIEE system from 11g to 12c and obviously wanted to test for regression, making sure that the upgraded system worked exactly the same as the old one. Manual comparison wasn't an option since they have hundreds or even thousands of analyses and dashboards, so Oracle Baseline Validation Tool (usually called just BVT) was the first candidate as a solution to automate the checks.

Using BVT is quite simple:

Right? Well, almost. The problem that we faced was that BVT Dashboards plugin for 11g (a very old 11.1.1.7.something) gave exactly what was expected. But for 12c (12.2.1.something) we got all numbers with a decimal point even while all analyses had "no decimal point" format. So the first feeling we got at this point was that BVT doesn't work well for 12c and that was somewhat disappointing.


I made a simple dashboard demonstrating the issue.

Measure values in the XML produced by BVT are exactly as on the dashboard. Looks good.

Dashboard looks good, but values in the XML have decimal digits.

As you can see, the analyses are the same or at least they look very similar but the XMLs produced by BVT aren't. From regression point of view this dashboard must get "DASHBOARDS PASSED" result, but it got "DASHBOARDS DIFFERENT".

Reading the documentation gave us no clear explanation for this behaviour. We had to go deeper and understand what actually caused it. Is it BVT screwing up the data it gets from 12c? Well, that is a highly improbable theory. Decimals were not simply present in the result but they were correct. Correct as in "the same as stored in the database", we had to reject this theory.
Or maybe the problem is that BVT works differently with 11g and 12c? Well, this looks more plausible. A few years have passed since 11.1.1.7 was released and it would not be too surprising if the old version and the modern one had different APIs used by BVT and causing this problem. Or maybe the problem is that 12c itself ignores formatting settings. Let's find out.

Neither BVT, nor OBIEE logs gave us any insights. From every point of view, everything was working fine. Except that we were getting 100% mismatch between the source and the target. My hypothesis was that BVT worked differently with OBIEE 11g and 12c. How can I check this? Decompiling the tool and reading its code would possibly give me the answer, but it is not legal. And even if it was legal, the latest BVT size is more than 160 megabytes which would give an insane amount of code to read, especially considering the fact I don't actually know what I'm looking for. Not an option. But BVT talks to OBIEE via the network, right? Therefore we can intercept the network traffic and read it. Shall we?

There are a lot of ways to do it. I work with OBIEE quite a lot and Windows is the obvious choice for my platform. And hence the obvious tool for me was Wireshark.

Wireshark is the world’s foremost and widely-used network protocol analyzer. It lets you see what’s happening on your network at a microscopic level and is the de facto (and often de jure) standard across many commercial and non-profit enterprises, government agencies, and educational institutions. Wireshark development thrives thanks to the volunteer contributions of networking experts around the globe and is the continuation of a project started by Gerald Combs in 1998.

What this "About" doesn't say is that Wireshark is open-source and free. Which is quite nice I think.

I'm not going to go into too many details about the installation process. It is quite simple and straightforward. Keep all the defaults unless you know what you are doing, reboot if asked and you are fine.

If you've never used Wireshark or analogues, the main question would be "Where to install it?". The answer is pretty simple - install it on your workstation, the same workstation where BVT is installed. We're going to intercept our own traffic, not someone else's.

A Bit of Wireshark

Before going to the task we want to solve let's spend some time familiarizing with Wireshark. Its starting screen shows all the network adapters I have on my machine. The one I'm using to connect to the OBIEE servers is "WiFi 2". 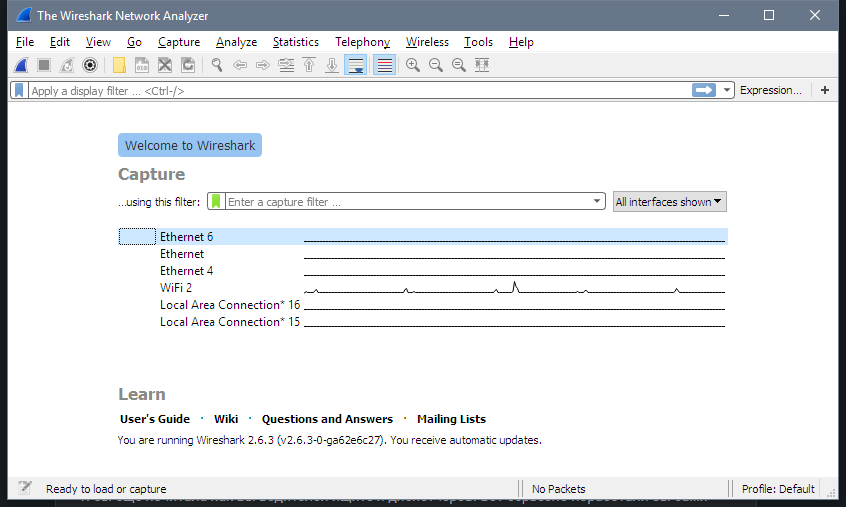 I double-click it and immediately see a constant flow of network packets flying back and forth between my computer and local network machines and the Internet. It's a bit hard to see any particular server in this stream. And "a bit hard" is quite an understatement, to be honest, it is impossible. 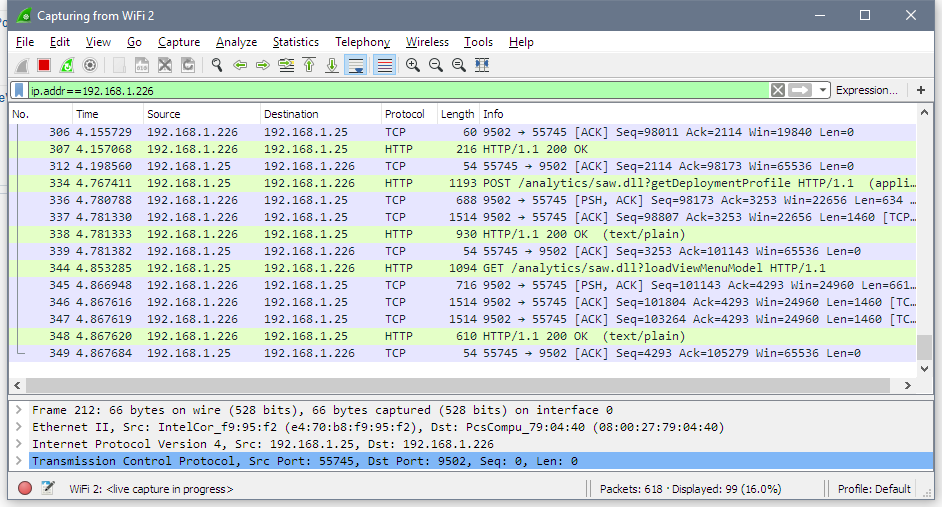 For example, here I opened http://192.168.1.226:9502/analytics page just like any other user would do. There are quite a lot of requests and responses. The browser asked for /analytics URL, the server after a few redirects replied what the actual address for this URL is login.jsp page, then browser requested /bi-security-login/login.jsp page using GET method and got the with HTTP code 200. Code 200 shows that there were no issues with the request.

The top window is a normal browser and the bottom one is Wireshark. Note that my credentials been sent via clear text and I think that is a very good argument in defence of using HTTPS everywhere.

That is a very basic use of Wireshark: start monitoring, do something, see what was captured. I barely scratched the surface of what Wireshark can do, but that is enough for my task.

Let's see how it works with 12c first. To make things more simple I created a catalogue folder with just one analysis placed on a dashboard. 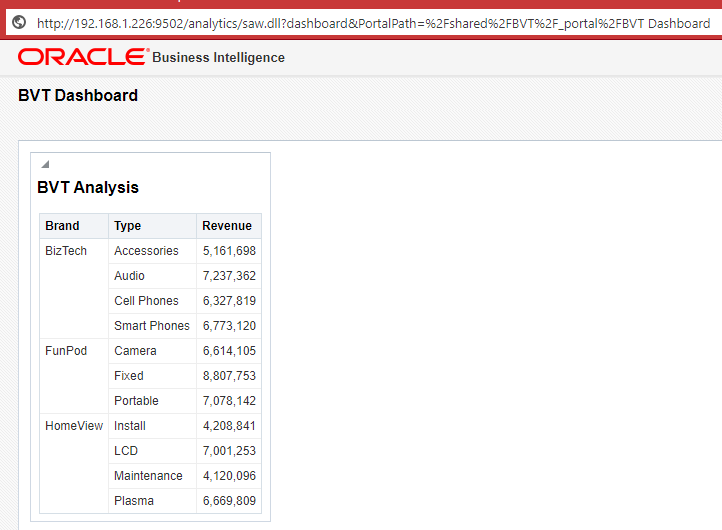 It's time to run BVT and see what happens.

Here is the dataset I got from OBIEE 12c. I slightly edited and formatted it to make easier to read, but didn't change anything important.

What did BVT do to get this result? What API did it use? Let's look at Wireshark. 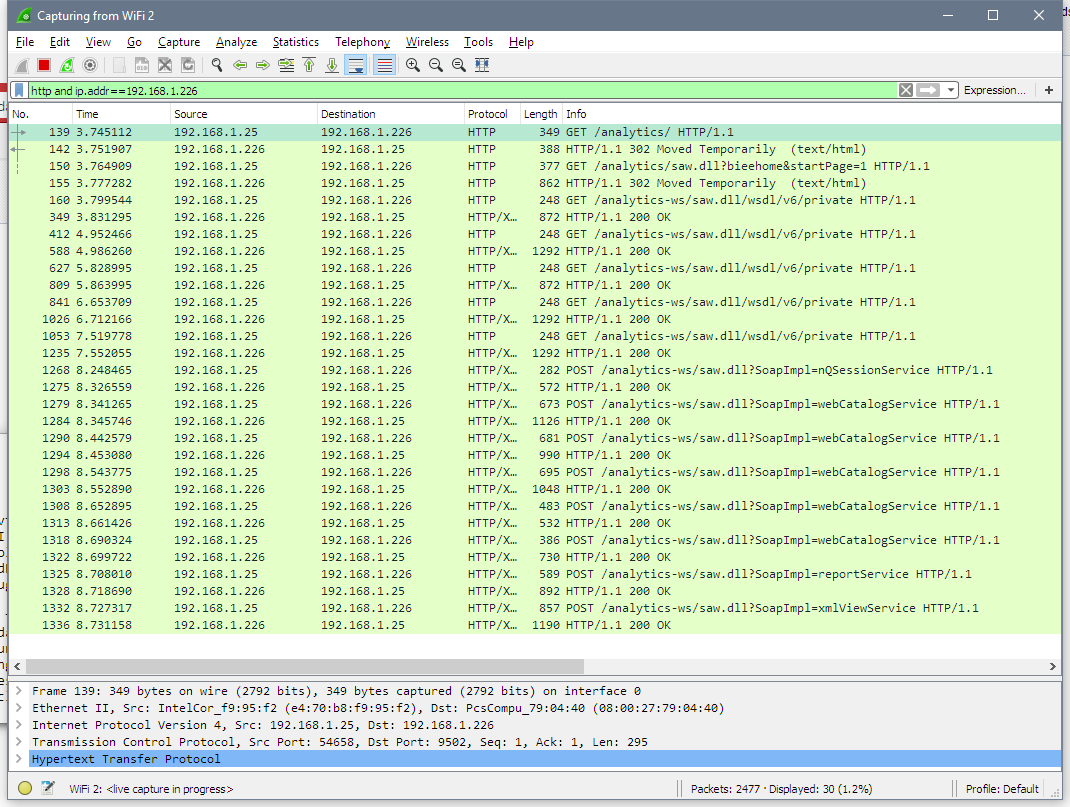 First three lines are the same as with a browser. I don't know why it is needed for BVT, but I don't mind. Then BVT gets WSDL from OBIEE (GET /analytics-ws/saw.dll/wsdl/v6/private). There are multiple pairs of similar query-response flying back and forth because WSDL is big enough and downloaded in chunks. A purely technical thing, nothing strange or important here.
But now we know what API BVT uses to get data from OBIEE. I don't think anyone is surprised that it is Web Services API. Let's take a look at Web Services calls.

First logon method from nQSessionService. It logs into OBIEE and starts a session. 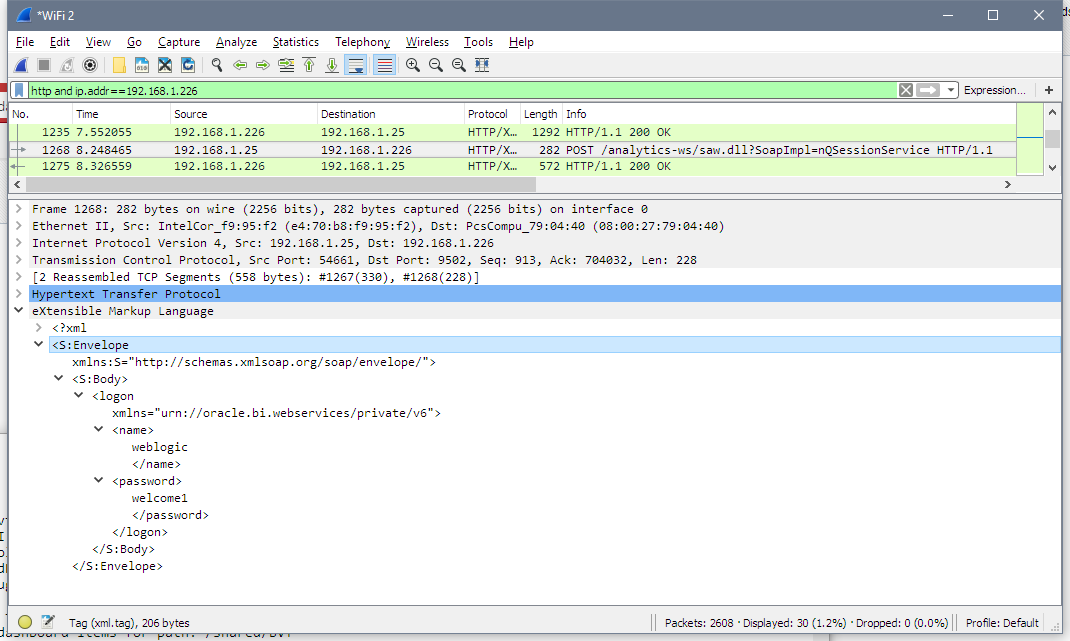 Next requests get catalogue items descriptions for objects in my /shared/BVT folder. We can see a set of calls to webCatalogServce methods. These calls are reading my web catalogue structure: all folders, subfolders, dashboard and analysis. Pretty simple, nothing really interesting or unexpected here.

Then we can see how BVT uses generateReportSQLResult from reportService to get logical SQL for the analysis. 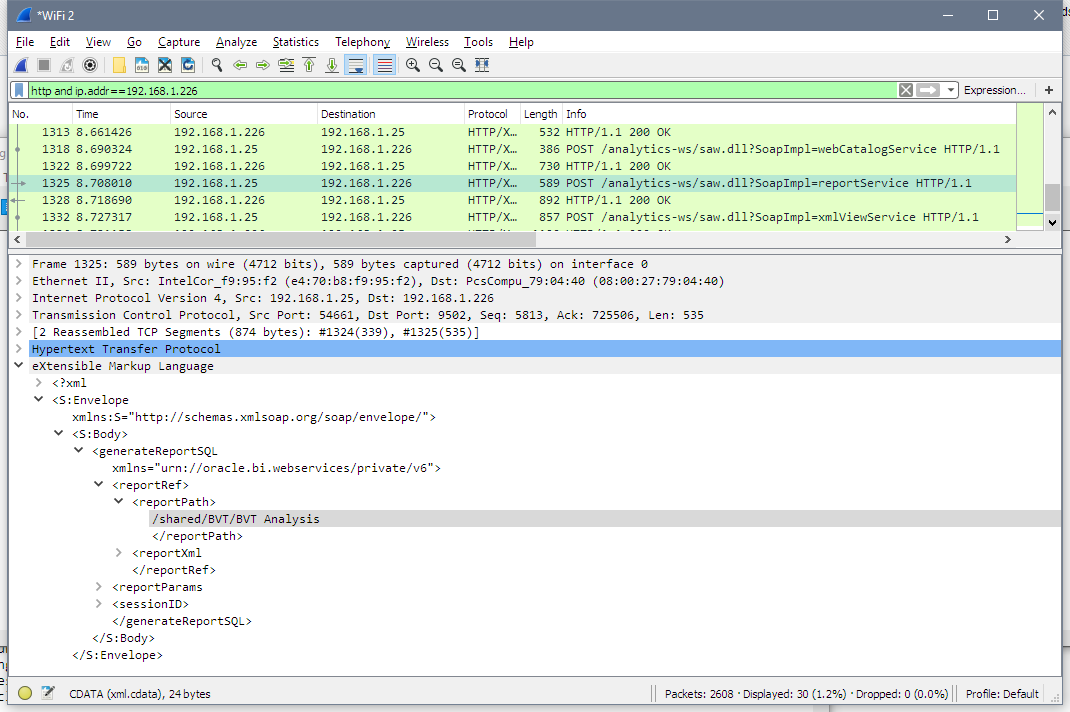 And gets analysis' logical SQL as the response. 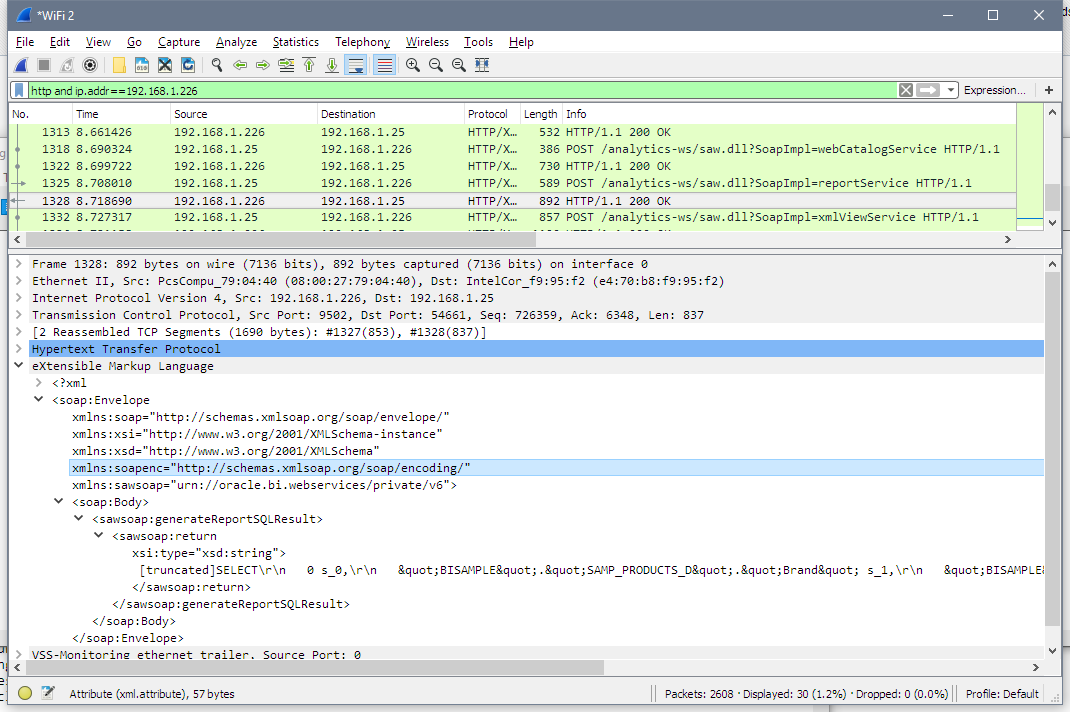 And the final step - BVT executes this SQL and gets the data. Unfortunately, it is hard to show the data on a screenshot, but the line starting with [truncated] is the XML I showed before. 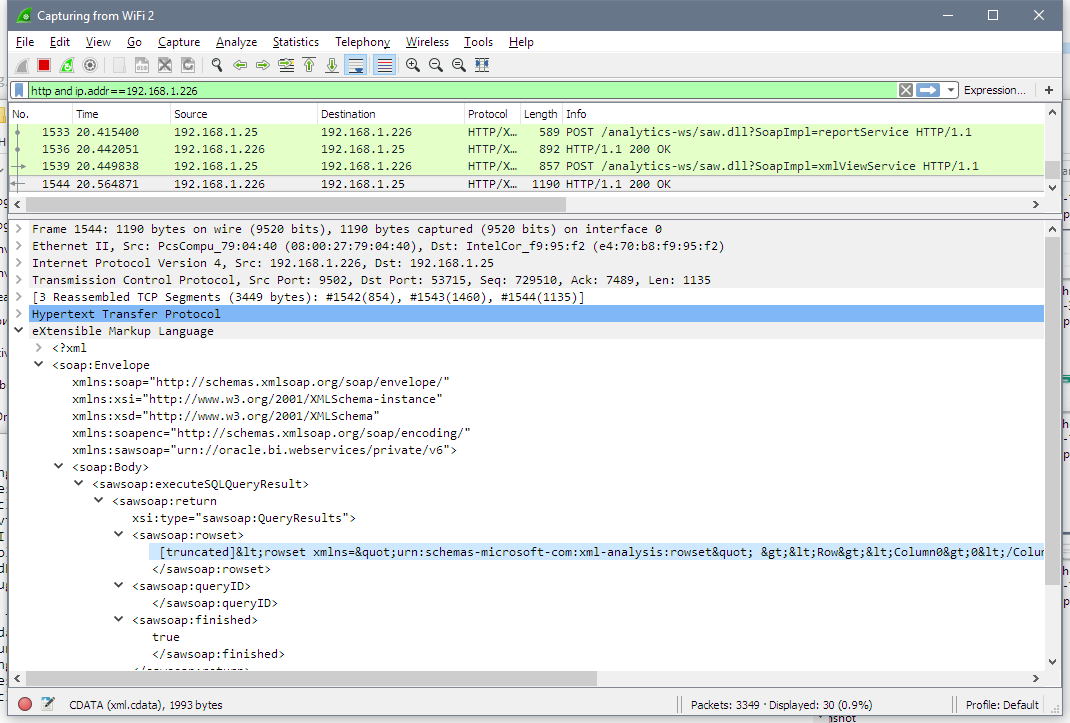 And that's all. That's is how BVT gets data from OBIEE.

I did the same for 11g and saw absolutely the same procedure. 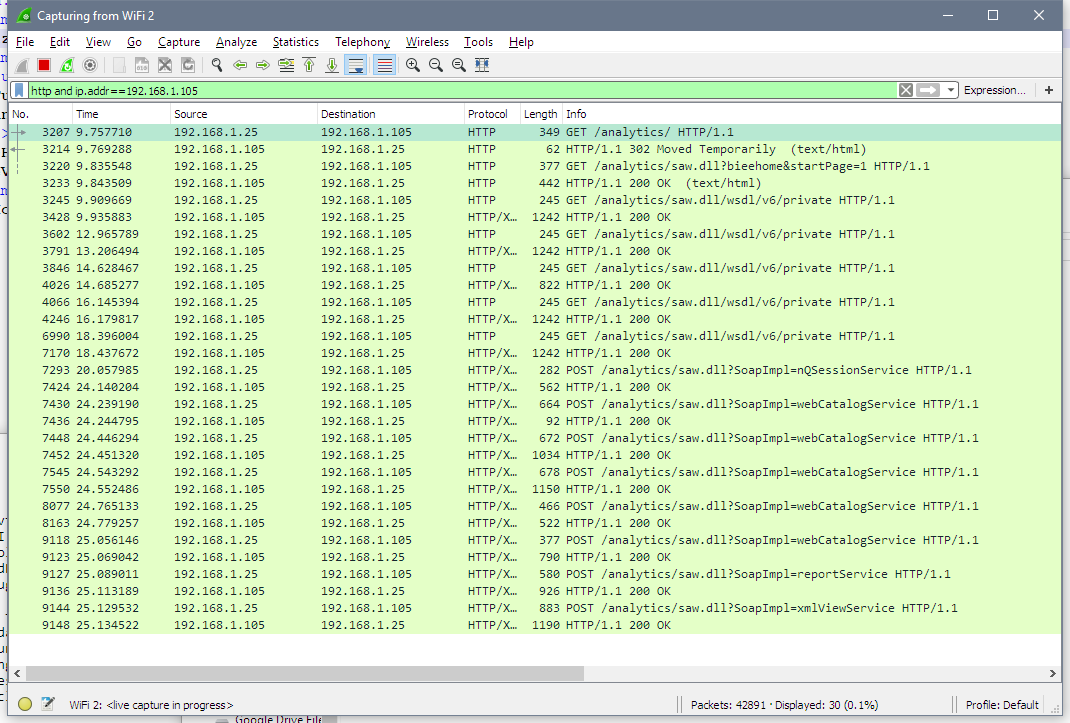 My initial theory that BVT may have been using different APIs for 11g and 12c was busted.

From my experiment, I found out that BVT used xmlViewService to actually get the data. And also I know now that it uses logical SQL for getting the data. Looking at the documentation I can see that xmlViewService has no options related to any formatting. It is a purely data-retrieval service. It can't preserve any formatting and supposed to give only the data. But hey, I've started with the statement "11g preserves formatting", how is that possible? Well, that was a simple coincidence. It doesn't.

In the beginning, I had very little understanding of what keywords to use on MoS to solve the issue. "BVT for 12c doesn't preserve formatting"? "BVT decimal part settings"? "BVT works differently for 11g and 12c"? Now I have something much better - "executeSQLQuery decimal". 30 seconds of searching and I know the answer. 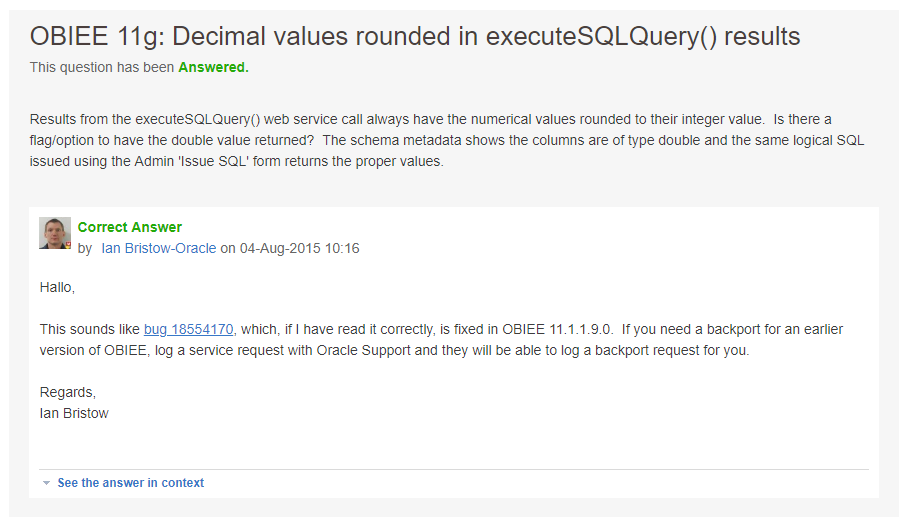 As you may have noticed I had no chance of finding this using my initial problem description. Nether BVT, nor 12g or 11.1.1.7 were mentioned. This thread looks completely unrelated to the issue, I had zero chances to find it.

OBIEE is a complex software and solving issues is not always easy. Unfortunately, no single method is enough for solving all problems. Usually, log files will help you. But when something works but not the way you expect, log files can be useless. In my case BVT was working fine, 11g was working fine, 12c was working fine too. Nothing special to write to logs was happening. That is why sometimes you may need unexpected tools. Just like this. Thanks for reading!