Over the past week Venkat, myself and the Rittman Mead India team have been running a series of BI Masterclasses at locations in India, in conjunction with ODTUG, the Oracle Development Tools User Group. Starting off in Bangalore, then traveling to Hyderabad and Mumbai, we presented on topics ranging from OBIEE through Exalytics through to EPM Suite and BI Applications, and with networking events at the end of each day. 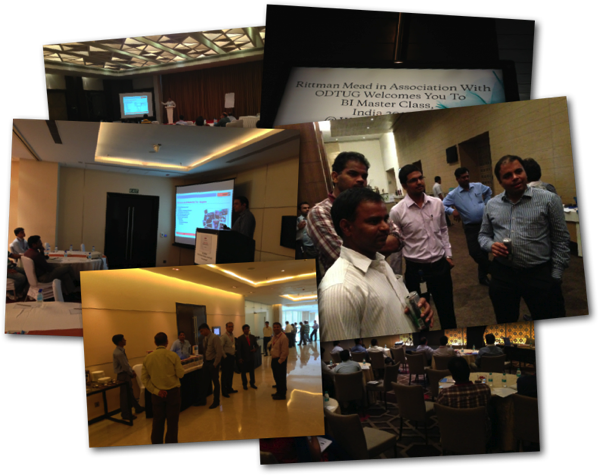 Around 50 attended at Bangalore, 30 in Hyderbad and 40 in Mumbai, at at the last event we were joined by Harsh Bhogle from the local Oracle office, who presented on Oracle's high-level strategy around business analytics. Thanks to everyone who attended, thanks to ODTUG for sponsoring the networking events, and thanks especially to Vijay and Pavan from Rittman Mead India who organised everything behind the scenes. If you're interested, here's a Flickr set of photos from all three events (plus a few at the start where I visited our offices in Bangalore.)

For anyone who couldn't attend the events, or if you were there and you'd like copies of the slides, the links below are for the PDF versions of the sessions we presented at various points over the week.

So I'm writing this in my hotel room in Mumbai on Sunday morning, waiting for the airport transfer and then flying back to the UK around lunchtime. It's been a great week but my only regret was missing the UKOUG Apps'13 conference last week, where I was also supposed to be speaking but managed to double-book myself with the event in India.

In the end, Mike Vickers from Rittman Mead in the UK gamely took my place and presented my session, which was put together as a joint effort with Minesh Patel, another of the team in the UK and one of our BI Apps specialists. Entitled "Oracle BI Apps - Giving the Users the Reports they *Really* Want", it's a presentation around the common front-end customisations that we typically carry out for customers who want to move beyond the standard, generic dashboards and reports provided by the BI Apps, and again if you missed the session or you'd like to see the slides, they're linked-to below:

That's it for now - and I'll definitely be at Tech'13 in a few weeks' time, if only because I've just realised I'm delivering the BI Masterclass sessions on the Sunday, including a session on OBIEE/ODI and Hadoop integration - I've been saying to myself I'd like to get these two tools working with Impala as an alternative to Hive, so that gives me something to start looking at on the flight back later today.

The latest release of Oracle's data replication tool, GoldenGate 12c, has many improvements. The release coincided with the Oracle…

In my previous post, I introduced the steps necessary for integrating Oracle BI Applications 11.1.1.7.1…