It’s the Saturday after Oracle Openworld 2014, and I’m now home from San Francisco and back in the UK. It’s been a great week as usual, with lots of product announcements and updates to the BI, DW and Big Data products we use on current projects. Here’s my take on what was announced this last week.

From a BI and DW perspective, the most significant product announcements were around Hadoop and Big Data. Up to this point most parts of an analytics-focused big data project required you to code the solution yourself, with the diagram below showing the typical three steps in a big data project - data ingestion, analysis and sharing the results.

At the moment, all of these steps are typically performed from the command-line using languages such as Python, R, Pig, Hive and so on, with tools like Apache Flume and Apache Sqoop used to bring data into and out of the Hadoop cluster. Under the covers, these tools use technologies such as MapReduce or Spark to do their work, automatically running jobs in parallel across the cluster and making use of the easy scalability of Hadoop and NoSQL databases.

You can also neatly divide the work up on a big data project into two phases; the “discovery” phase typically performed by a data scientist where data is loaded, analysed, correlated and otherwise “understood” to provide the initial insights, and then an “exploitation” phase where we apply governance, provide the output data in a format usable by BI tools and otherwise share the results with the wider corporate audience. The updated Information Management Reference Architecture we collaborated on with Oracle and launched by in June this year had distinct discovery and exploitation phases, and the architecture itself made a clear distinction between the Innovation part that enabled the discovery phase of a project and the Execution part that delivered the insights and data in a more governed, production setting. 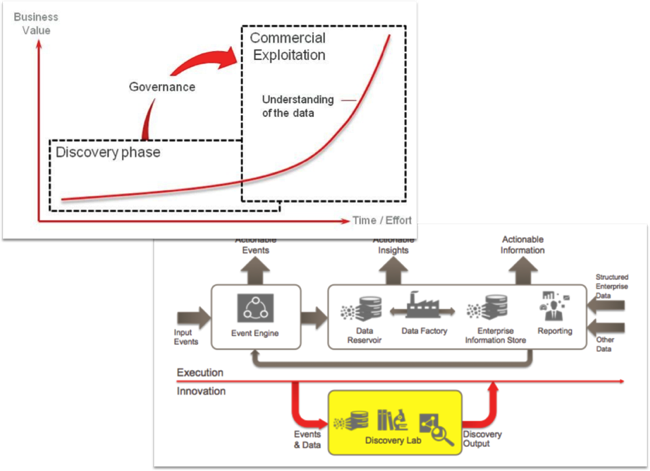 This was the theme of the product announcements around analytics, BI, data warehousing and big data during Openworld 2014, with Oracle’s Omri Traub in the photo below taking us through Oracle’s big data product strategy. What Oracle are doing here is productising and “democratising” big data, putting it clearly in context of their existing database, engineered systems and BI products and linking them all together into an overall information management architecture and delivery process. 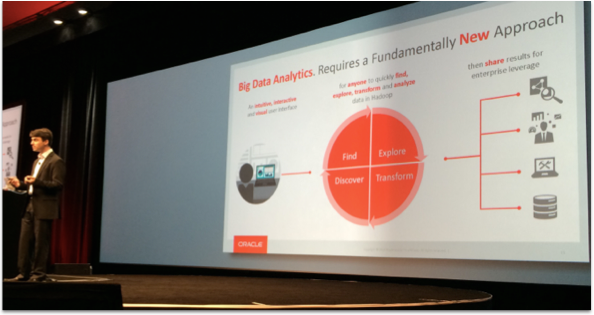 So working through from ingestion through to data analysis, these steps have typically been performed by data scientists using scripting tools and rudimentary data visualisation engines, making them labour-intensive and reliant on a small set of people conversant with these tools and process. Oracle Big Data Discovery is aimed squarely at these steps, and combines Apache Spark-based data preparation and transformation capabilities with an analysis and visualisation engine based on Endeca Server. 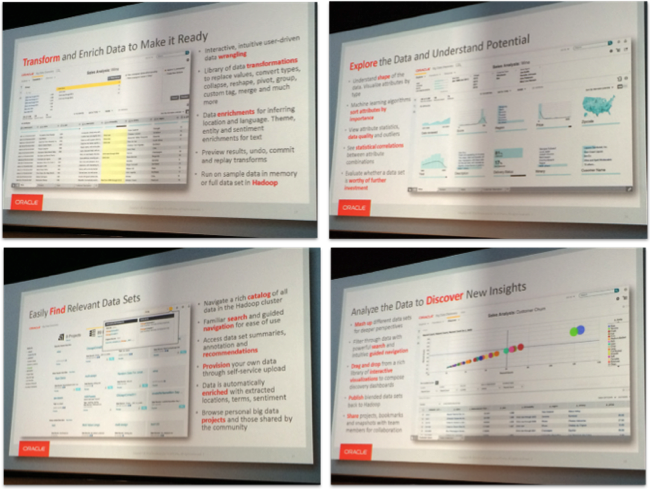 Under the covers it comprises two parts; the data loading, transformation and profiling part that uses Apache Spark to do its work in parallel across all the nodes in the cluster, and the analysis part, which takes data prepared by Apache Spark and loads into the Endeca Server in-memory engine to perform the analysis, aggregation and data visualisation. Unlike the Spark part the Endeca server element runs just on one node and limits the size of the analysis dataset to what can run in-memory in the Endeca Server engine, but in practice you’re going to work with a sample of the data rather than the entire dataset at that stage (in time the assumption is that the Endeca Server engine will be unbundled and run natively on YARN, giving it the same scalability as the Spark-based data ingestion and transformation part). Initially Big Data Discovery will run on-premise with a cloud version later on, and it’s not dependent on Big Data Appliance - expect to see something later this year / early next year.

Another new product that addresses the discovery phase and discovery lab part of a big data project is Oracle Data Enrichment Cloud Service, from the Oracle Data Integration team and designed to complement ODI and Oracle EDQ. Whilst Oracle positioned ODECS as something you’d use as well as Big Data Discovery and typically upstream from BDD, to me there seemed to be a fair bit of overlap between the products, with both tools doing data profiling and transformation but BDD being more focused on the exploration and discovery part, and ODECS being more focused on early-stage data profiling and transformation. 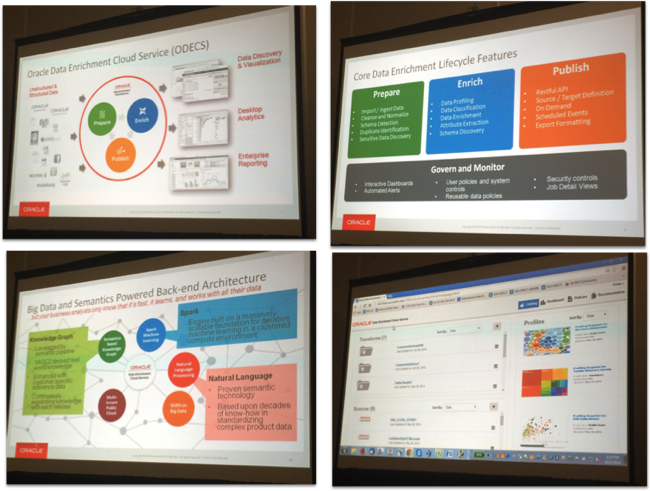 ODECS is clearly more of an ETL tool complement and runs natively in the cloud, right from the start. It’s most probably aimed at customers with their Hadoop dataset already in the cloud, maybe using Amazon Elastic MapReduce or Oracle’s new Hadoop-as-a-Service and has more in common with the old Data Quality Option for Oracle Warehouse Builder than Endeca’s search-first analytic interface. It’s got a very nice interface including a mobile-enabled website and the ability to include and merge in external datasets, including Oracle’s own Data as a Service platform offering. Along with the new Metadata Management tool Oracle also launched at Openworld it’s a great addition to the Oracle Data Integration product suite, but I can’t help thinking that its initial availability only on Oracle’s public cloud platform is going to limit its use with Oracle’s typical customers - we’ll have to just wait and see.

The other major product that addresses big data projects was Oracle Big Data SQL. Partly addressing the discovery phase of big data projects but mostly (to my mind) addressing the exploitation phase, and the execution part of the information management architecture, Big Data SQL gives Oracle Exadata the ability to return data from Hive and NoSQL on the Big Data Appliance as well as data from its normal relational store. I covered Big Data SQL on the blog a few weeks ago and I’ll be posting some more in-depth articles on it next week, but the other main technical innovation with the product is its bringing of Exadata’s SmartScan feature to Hadoop, projecting and filtering data at the Hadoop storage node level and also giving Hadoop the ability to understand regular Oracle SQL, rather than the cut-down version you get with HiveQL. 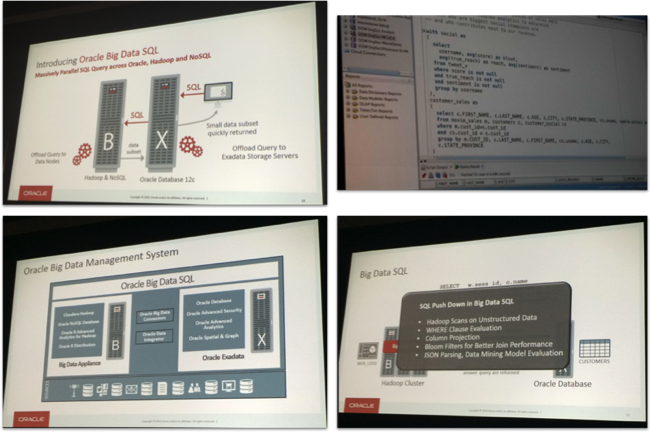 Where this then leaves us is with the ability to do most of a big data project using (Oracle) tools, bringing big data analysis within reach of organisations with Oracle-style budgets but without access to rare data scientist-type resources. Going back to my diagram earlier, a post-OOW big data project using the new products launched in this last week could look something like this:

Big Data SQL is out now and depends on BDA and Exadata for its use; Big Data Discovery should be out in a few months time, runs on-premise but doesn’t require BDA, whilst ODECS is cloud-only and runs on a BDA in the background. Expect more news and more integration/alignment from the products as 2014 ends and 2015 starts, and we’re looking forward to using them on Oracle-centric Hadoop projects in the near future.

Other news announced over the week for products we more commonly use on projects include:

Finally, something that we were particularly pleased to see was the updated Oracle Information Management Architecture I mentioned earlier referenced in most of the analytics sessions, with Oracle’s Balaji Yelamanchili for example introducing it in his big data and business analytics general session mid-way through the week. 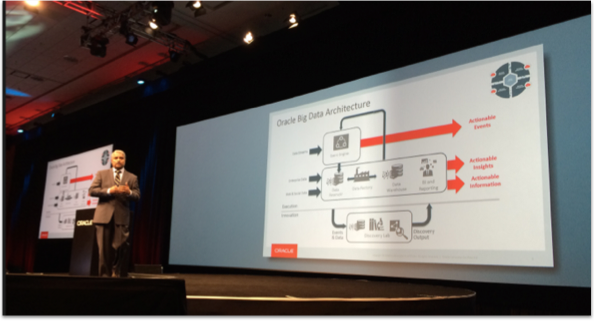 We love the way this brings together the big data components and puts them in the context of the wider data warehouse and analytic processes, and compared to a few years ago when Hadoop and big data was considered completely separate to data warehousing and BI and done by staff completely different to the core business analytics team, this new reference architecture puts it squarely within the world of BI and analytics we work in. It also emphasises the new abilities Hadoop, NoSQL databases and big data can bring us - support for wider sets of data sources with dynamic schemas, the ability to economically work with and analyse much larger datasets, and support discovery-type upfront analysis work. Finally, it recognises that to get true value out of analysis you start on Hadoop, you eventually need to add proper data governance, make the results more widely available using full SQL tools, and use the right tools - relational databases, OLAP servers and the like - to analyse the data once its in a more structured form.

If you missed our write-up on the updated Information Management Reference Architecture you can can read our two-part blog post here and here, read the Oracle white paper, or listen to the podcast with OTN Archbeat’s Bob Rhubart. For now though I'm looking forward to seeing the family after a week and a half away in San Francisco - thanks to OTN and the Oracle ACE Director Program for sponsoring my visit over to SF for Openworld, and we’ll post our conference presentation slides later next week when we’re back in the UK and US offices.