Long-term readers of this blog will probably know that I’m enthusiastic about the possibilities around running OBIEE in the cloud, and over the past few weeks Rittman Mead have been participating in the beta program for release one of Oracle’s Business Intelligence Cloud Service (BICS). BICS went GA over the weekend and is now live on Oracle’s public cloud site, so all of this week we’ll be running a special five-part series on what BI Cloud Service is, how it works and how you go about building a simple application. I’m also presenting on BICS and our beta program experiences at Oracle Openworld this week (Oracle BI in the Cloud: Getting Started, Deployment Scenarios, and Best Practices [CON2659], Monday Sep 29 10:15 AM - 11.00 AM Moscone West 3014), so if you’re at the event and want to hear our thoughts, come along.

Over the next five days I’ll be covering the following topics, and I’ll update the list with hyperlinks once the articles are published:

So what is Oracle BI Cloud Service, and how does it relate to regular, on-premise OBIEE11g?

On the Oracle BI Cloud Service homepage, Oracle position the product as “Agile Business Intelligence in the Cloud for Everyone”, and there’s a couple of key points in this positioning that describe the product well. 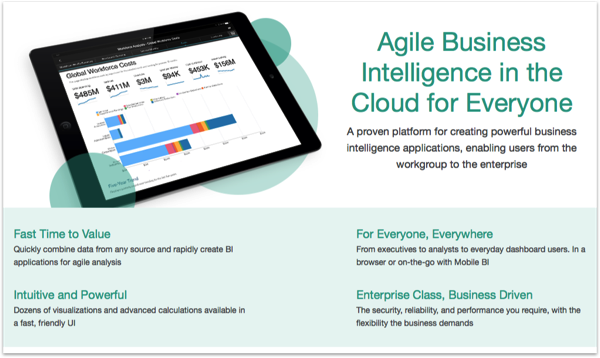 The “agile” part is referring to the point that being cloud-based, there’s no on-premise infrastructure to stand-up, so you can get started a lot quicker than if you needed to procure servers, get the infrastructure installed, configure the software and get it accepted by the IT department. Agile also refers to the fact that you don’t need to purchase perpetual or one/two-year term licenses for the software, so you can use OBIEE for more tactical projects without having to worry about expensive long-term license deals. The final way that BICS is “agile” is in the simplified, user-focused tools that you use to build your cloud-based dashboards, with BICS adopting a more consumer-like user interface that in-theory should mean you don’t have to attend a course to use it.

BICS is built around standard OBIEE 11g, with an updated user interface that’ll roll-out across on-premise OBIEE in the next release and the standard Analysis Editor, Dashboard Editor and repository (RPD) under the covers. Your initial OBIEE homepage is a modified version of the standard OBIEE homepage that lists standard developer functions down the left-hand side as a series of menu items, and the BI Administration tool is replaced with an online, thin-client repository editor that provides a subset of the full BI Administration tool functionality. 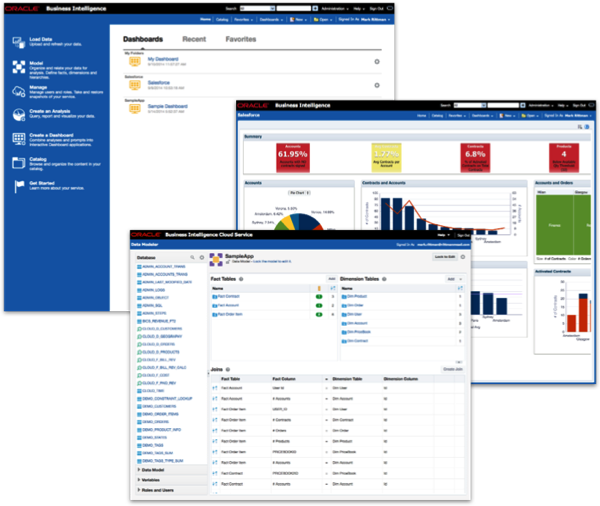 Customers who license BICS in this initial release get two environments (or instances) to work with; a pre-prod or development environment to create their applications in initially, and a production environment into which they deploy each release of their work. BICS is also bundled with Oracle Database Schema Service, a single-schema Oracle Database service with an ApEx front-end into which you store the data that BICS reports on, and with ApEx and BICS itself having tools to upload data into it; this is, however, the only data source that BICS in version 1 supports, so any data that your cloud-based dashboards report on has to be loaded into Database Schema Service before you can use it, and you have to use Oracle’s provided tools to do this as regular ETL tools won’t connect. We’ll get onto the data provisioning process in the next article in this five-part series.

BICS dashboards and reports currently support a subset of what’s available in the on-premise version. The Analysis Editor (“Answers”) is the same as on-premise OBIEE with the catalog view on the left-hand side, tabs for Results and so on, and the same set of view types (and in fact a new one, for heat maps). There’s currently no access to Agents, Scorecards, BI Publisher or any other Presentation Services features that require a database back-end though, or any Essbase database in the background as you get with on-premise OBIEE 11.1.1.7+. 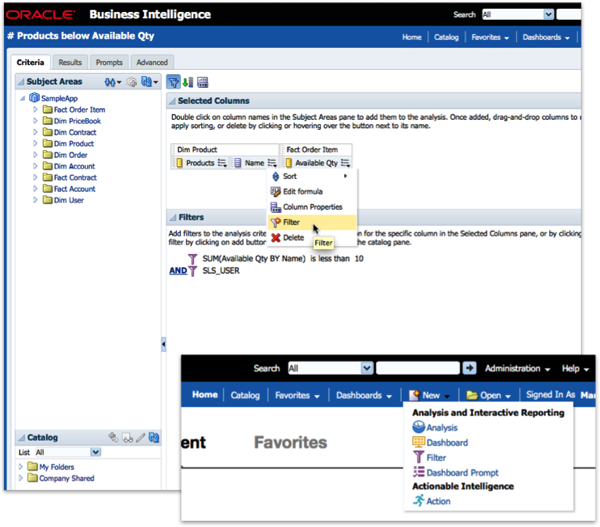 What does become easier to deploy though is Oracle BI Mobile HD as every BICS instance is, by definition, accessible over the internet. Last time I checked the current version of BI Mobile HD on Apple’s App Store couldn’t yet connect, but I’m presuming an update will be out shortly to deal with BICS’s login process, which gets you to enter a BICS username and password along with an “identity domain” that specifics the particular company tenant ID that you use. 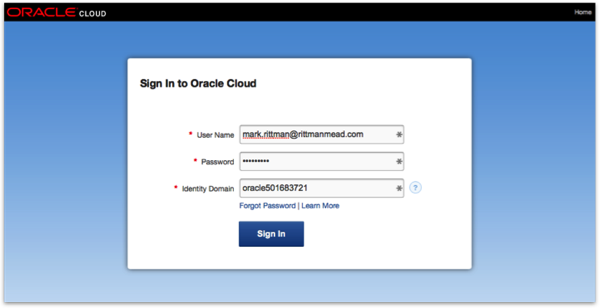 I’ll cover the thin-client data modeller later in this series in more detail, but at a high-level what this does is remove the need for you to download and install Oracle BI Administration to set up your BI Repository, something that would have been untenable for Oracle if they were serious about selling a cloud-based BI tool. The thin-client data modeller takes the most important (to casual users) features of BI Administration and makes them available in a browser-based environment, so that you can create simple repository models against a single data source and add features like dimension hierarchies, calculations, row-based and subject-area security using a point-and-click environment. 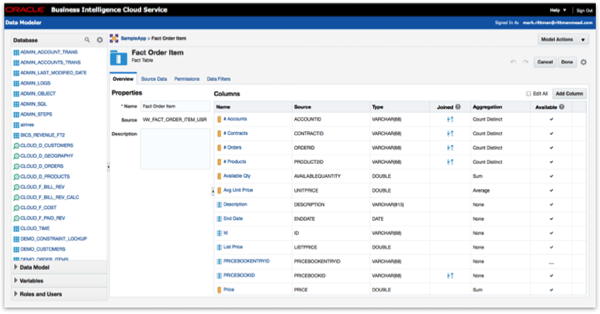 Features that are excluded in this initial release include the ability to define multiple logical table sources for a logical table, creating multiple business areas, creating calculations using physical (vs. logical) tables and so on, and there’s no way to upload on-premise RPDs to BICS, or download BICS ones to use on-premise, at this stage. What you do get with BICS is a new import and export format called a “BI Archive” which bundles up the RPD, the catalog and the security settings into a single archive file, and which you use to move applications between your two instances and to store backups of what you’ve created.

So what market is BICS aimed at in this initial release, and what can it be used for? I think it’s fair to say that in this initial release, it’s not a drop-in replacement for on-premise OBIEE 11g, with only a subset of the on-premise features initially supported and some fairly major limitations such as only being able to report against a single database source, no access to Agents, BI Publisher, Essbase and so on. But like the first iteration of the iPhone or any consumer version of a previously enterprise-only tool, its trying to do a few things well and aiming at a particular market - in this case, departmental users who want to stand-up an OBIEE environment quickly, maybe only for a limited amount of time, and who are familiar with OBIEE and would like to carry on using it. In some ways its target market is those OBIEE customers who might otherwise have use Qlikview, Tableau or one of the new SaaS BI services such as Good Data, who most probably have some data exports in the form of Excel spreadsheets or CSV documents, want to upload them to a BI service without getting all of IT involved and then share the results in the form of dashboards and reports with their team. Pricing-wise this appears to be who Oracle are aiming the service at (minimum 10 users, $3500/month including 50GB of database storage) and with the product being so close to standard OBIEE functionality in terms of how you use it, it’s most likely to appeal to customers who already use OBIEE 11g in their organisation.

That said, I can see partners and ISVs adopting BICS to deliver cloud-based SaaS BI applications to their customers, either as stand-alone analysis apps or as add-ons to other SaaS apps that need reporting functionality. Oracle BI Cloud Service is part of the wider Oracle Platform-as-a-Service (PaaS) that includes Java (WebLogic), Database, Documents, Compute and Storage, so I can see companies such as ourselves developing reporting applications for the likes of Salesforce, Oracle Sales Cloud and other SaaS apps and then selling them, hosting included, through Oracle’s cloud platform; I’ll cover our initial work in this area, developing a reporting application for Salesforce.com data, later in this series. 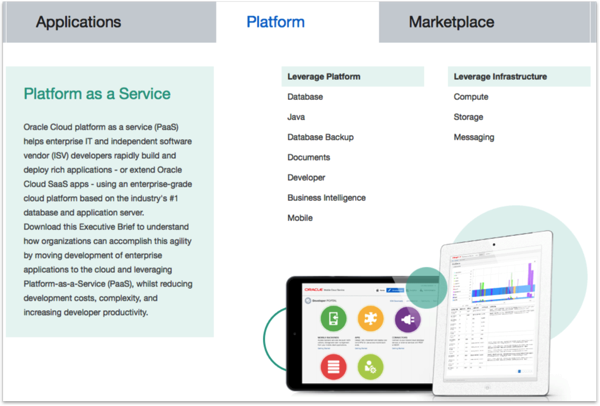 Of course it’s been possible to deploy OBIEE in the cloud for some while, with this presentation of mine from BIWA 2014 covering the main options; indeed, Rittman Mead host OBIEE instances for customers in Amazon AWS and do most of our development and training in the cloud including our exclusive “ExtremeBI in the Cloud” agile BI service; but BICS has two major advantages for customers looking to cloud-deploy OBIEE:

such that we’ll be offering it as an alternative to AWS hosting for our ExtremeBI product, for customers who in-particular want the monthly license option.

So, an interesting start. As I said, I’ll be covering the detail of how BICS works over the next five days, starting with the data upload and provisioning process in tomorrow’s post - check back tomorrow for the next instalment.