In the first post in this series I looked at the new Oracle BI Cloud Service, which went GA over the weekend and which Rittman Mead have been using these past few weeks as part of a beta release. In the first post I looked at what BICS is and who its aimed at in this initial release, and went through the features at a high-level; over the rest of the week I’ll be looking at the features in-detail, starting today with the data upload and provisioning process. Here’s the links to the rest of the series, with the items getting updated over the week as I post each entry in the series:

As I mentioned in that first post, "Introduction to Oracle BI Cloud Service : Product Overview", BICS in this initial release to my mind is aimed at departmental use-cases where someone wants to quickly upload and analyse an offline dataset and share the results with other members of their team. BICS comes bundled with Oracle Database Schema Service and 50GB of storage, and OBIEE in this setup reports just against this data source with no ability to reach-out dynamically to other data sources or blend those sources with the main one in Oracle’s cloud database. It’s aimed really at users with a single source of data to work with, who’ve probably obtained it as an export from some other system and just want to be able to report against it, though as we’ll see later in this post it is possible to link to other SaaS sources with a bit of PL/SQL wizardry.

So the first task you’re likely to perform when working with BICS is to upload some data to report on. There are three main options for uploading data to BICS, two of which are browser-based and aimed at end-users, and one that uses SQL*Developer and more aimed at devs. BICS itself comes with a menu items on the home page for uploading data, and this is what we’ll think users will use most as it’s built-into the tool and fairly prominent. 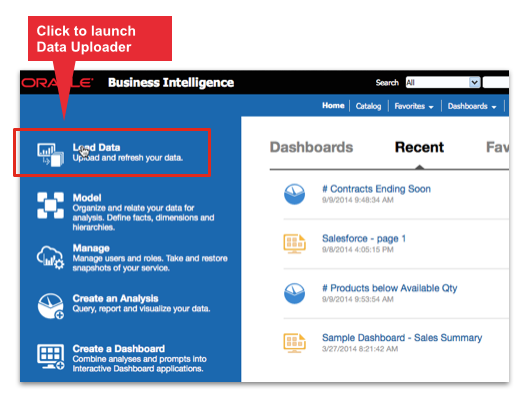 Clicking on this menu item launches an ApEx application hosted in the Database Schema Service that comes with BICS, and which allows you to upload and parse XLS and delimited file-types to the database cloud instance and then store the contents in database tables. 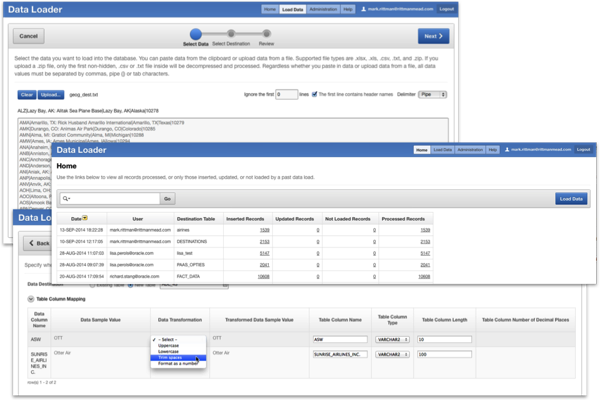 Oracle Database Schema Service also comes with Application Express (ApEx) as a front-end, and ApEx has similar tools for upload datasets into the service, with additional features for creating views and PL/SQL packages to process and manipulate the data, something we used in our beta program example to connect to Salesforce.com and download data using their REST API. In-theory you shouldn’t need to use these features much, but SIs and partners such as ourselves will no doubt use ApEx a lot to build out the loading infrastructure, data cleansing and other features that you might want for a packaged cloud app - so get your PL/SQL books out and brush-up on ApEx development. 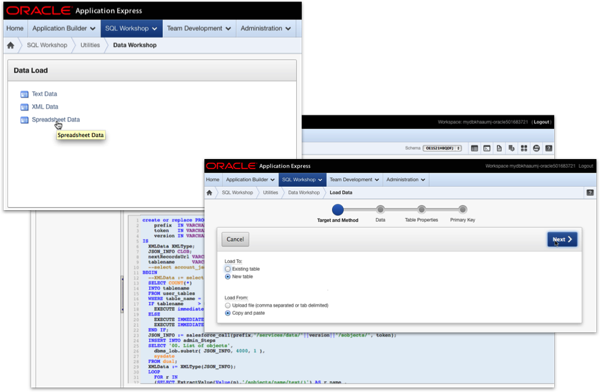 The other way to get data into BICS is to use Oracle SQLDeveloper, which has a special Oracle Cloud connector type that allows you to view and work with database objects as if they were regular database ones, and upload data to the cloud in the form of “carts”. I’d imagine these options will get extended over time, either by tools or utilities Oracle release for this v1.0 BICS release, or by BICS eventually supporting the full Oracle Database Instance Service that’ll support regular SQLNet connections from ETL tools. 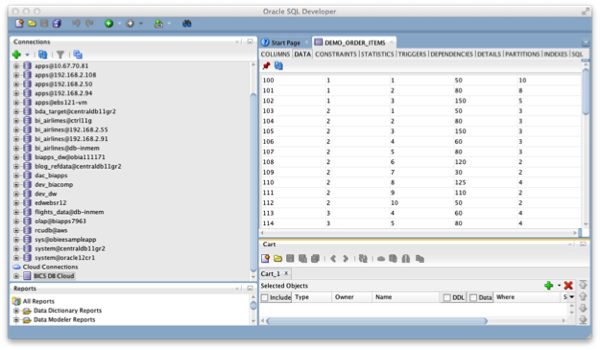 So once you’ve got some data uploaded into Database Schema Services, you’ll end up with a set of source tables from which you can create your BI Repository. Check back tomorrow for more details on how BICS’s new thin-client data modeller works and how you create your business model against this cloud data source, including how the repository editing and checkout process works in this new potentially multi-user development environment.