This week we’ve been looking at the new Oracle BI Cloud Service (BICS), the cloud version of OBIEE11g that went GA at the start of this week. Rittman Mead were part of the beta program for BICS and spend a couple of weeks building a sample BICS application to put the product through its paces, creating a reporting application for Salesforce.com that pulled in its data via the Salesforce REST API and staged it in the Oracle Database Schema Service that comes with BICS. Earlier in the week we looked at how data was uploaded or transferred into the accompanying database schema, and yesterday looked at how the repository was created using the new thin-client data modeller. Today, we’ll look at how you create the dashboards and reports that your users will use, using the Analysis and Dashboard Editors that are part of the service. If you’re arriving mid-way through the series, here’s the links to the other posts in the series:

In fact creating analyses and dashboards is the part of BICS that has least changed compared to the on-premise version. In keeping with the “self-service” theme for BICS there’s an introductory set of guidance notes when you first connect to BICS, like this: 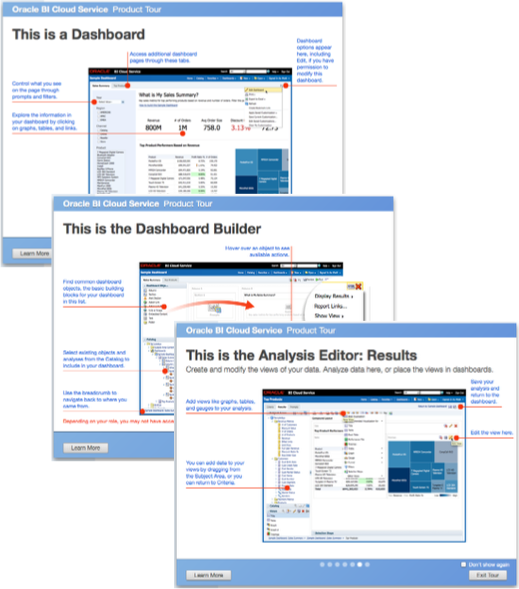 and the dashboard and analysis editors are available as menu options on the Home page, along with a link to the Catalog view, like this: 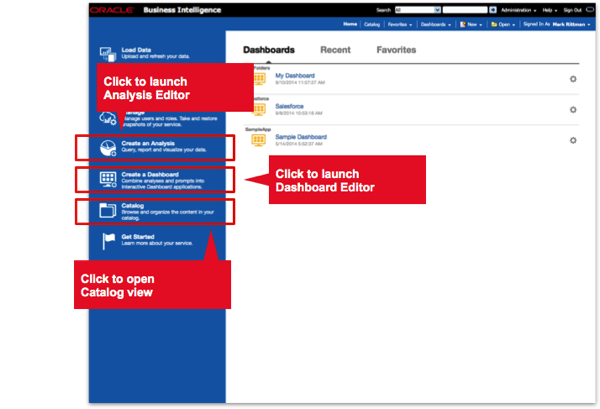 From that point on though it’s standard Answers and Dashboards, with the normal four-tab editor view within Answers (the Analysis Editor) and the ability to create views, calculations, filters and so on. Anyone familiar with Answers will be at home within the cloud version, and there’s a new visualisation - the heat map view, as shown in the final screenshot later in this article - that hints at other visualisations that we’ll see featured first in the cloud version of OBIEE, expected to be updated more frequently than the on-premise version (one of the major selling points for customers looking to adopt new features as soon as possible with OBIEE). 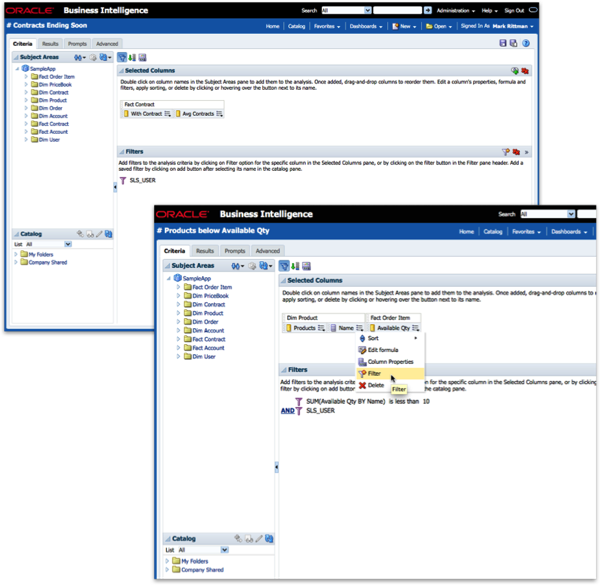 What’s missing from this environment though are features like Agents and alerts, scorecards and BI Publisher, or the ability to create actions other than links to other web pages or catalog content.

These are features that Oracle are saying they’ll add-back in time though as the underlying infrastructure for BICS builds-out, and of course the whole UI is likely to go through a rev with the 12c release of OBIEE due sometime in 2015. Dashboards are also created in the same way as with on-premise OBIEE, with the same Dashboard Editor and access to features like conditional display of sections and support for presentation variables.

So, that wraps-up our quick tour around the analysis and dashboard creation parts of Oracle BI Cloud Service; tomorrow, to finish-up the series we’ll look at the administration elements of BICS including new self-service application role provisioning, tools for administering and monitoring the instance and for backing-up and migrating content from one instance to another.

Earlier in the week we’ve looked at the developer features within Oracle BI Cloud Service (BICS), aimed at…

Earlier in this series we’ve looked at the overall product proposition for Oracle BI Cloud Service (BICS), and…